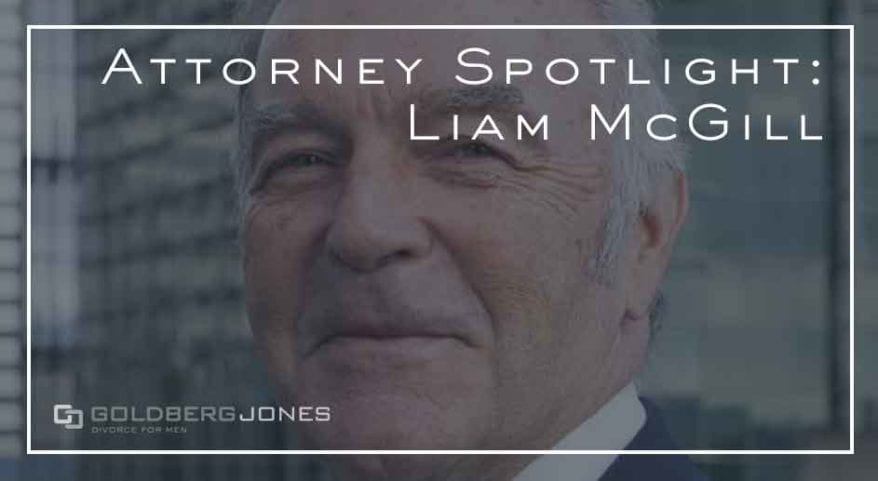 Liam’s first experience as a lawyer in Michigan was in general practice but he eventually opted to move to Oregon. He had a young family at the time and decided that if he could pick a place to settle in and put down roots, Oregon was an ideal choice. He also realized that when he relocated he would need to pick a specific area of focus. Family law seemed like an excellent opportunity and he threw himself into it headlong.

Altogether, Liam has practiced law for nearly 30 years but he joined us here at Goldberg Jones in our Portland office 18 years ago in February of 1998. Mr McGill is licensed to practice law in both Oregon and Washington so no matter which side of the river you reside or choose to file, you can avail yourself of his services. Liam sees himself as a patient practitioner who saves his client’s resources whenever possible. “I always try to find middle ground with the other side but will be certain my client is represented aggressively when negotiation fails.” Liam has a calm demeanor and is well received by the family law judges that he practices before. He brought this pragmatism to bear when managing his own “friendly divorce”.

Colin Amos, managing partner of Goldberg Jones Portland office said of Liam, “There is no substitute for experience and Liam McGill is one of the most experienced attorneys practicing family law both in Oregon and Washington”. Liam instills confidence in clients who are going through one of the roughest periods in their lives and immediately lays out a game plan for success. “Having been acknowledged by the bench for his extremely effective method of litigation, Liam provides a perfect balance between experience and appropriate tenacity.”

Founding partner Rick Jones stated, “Liam remains a cornerstone of our office. His wealth of experience and nearly two decades with Goldberg Jones makes Liam an invaluable asset to the entire firm. He has truly seen it all!”

Of course, if you’ve worked with or encountered Mr. McGill through his work, you already know Liam the lawyer. We want to introduce you to Liam the person. When asked what the greatest moment or accomplishment of his life thus far has been, he cites lettering in football as a sophomore in high school followed closely by passing the bar. Liam has a lifelong love of sports and has been a member of the Portland City Squash League for many years. He keeps in shape through kettlebell training and has run a marathon.

He also loves soccer and has followed his three kids in their soccer careers from mini through classics which he describes as “great fun!” He is a huge fan of the 2015 MLS champion Portland Timbers. Liam is drawn to the great outdoors and the natural beauty of the Pacific Northwest. After several years of camping on Orcas Island in the San Juans, he bought a vacation house there in 2008 just as the housing bubble was bursting. He states that, “it definitely turned out to be a good decision.”

In addition to sports and the outdoors, Liam is a movie buff and sees a movie every Saturday night. He says that he likes to, “sneak in a soda and eat popcorn at the show.” He likes all kinds of movies but indies and foreign films are the most interesting to him. His all time favorite films are The Godfather, part 1, Rocky and Tender Mercies. When asked what his favorite guilty pleasure is, he states that he enjoys clipping coupons. Not sure that qualifies as a “guilty pleasure” but it’s that sort of pragmatism that makes him an excellent steward of his client’s resources and has led to much appreciation from those he serves.

When asked to share some interesting or exciting events from his life he mentioned seeing the Beatles perform at Olympic Stadium in Detroit back in 1966. He also got to drive a car in a presidential motorcade in 1994 when then President Bill Clinton visited Detroit because he was running for county commissioner that year . He says that he didn’t win but he did get a picture with the president out of it. we’re sorry he didn’t win but Detroit’s loss was definitely our gain!

When asked if there’s anything else he would like to share about himself, Liam mentioned that he has a French Poodle named “Reuben”. Apparently in addition to his kids, sports, the outdoors, movies, politics and the law, he loves animals as well. We’re just proud to have him as part of our firm.