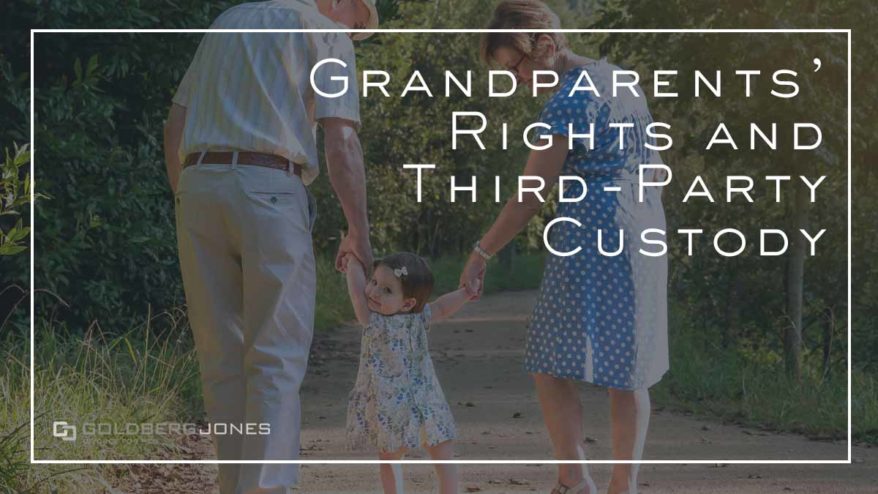 Families come in all shapes, sizes, and varieties. Most often parents are involved in a child’s life, but that’s not always the case. In some situations, grandparents or other third party wind up with custody, raising another generation of kids. They may be the only parents a child ever knows.

Often this results from a parent battling mental health or substance abuse problems and leaving a child in the care of a grandparent for an extended amount of time.

But what happens when they come back and want cut off the connection between grandchild and grandparent? What rights to grandparents have when it comes to custody and visitation in Oregon?

The law protects the rights of parents, both biological and adoptive. These laws, however, don’t necessarily extend to grandparents.

As in most cases involving minors, any visitation or custody cases put the best interests of the children above all other concerns. In most situations, the court presumes living with parents is in the child’s best interest, but it’s possible to show otherwise.

Can a Third Party Get Custody?

As you might imagine, this isn’t a quick, simple, or easy process.

Legally, a parent’s rights take precedence, but in Oregon, it is possible for a third party, including grandparents, to file for child custody.

In order to petition for custody, grandparents must have an established “child-parent relationship.”

What is a Child-Parent Relationship?

ORS 109.119 provides a specific definition of this term. Under this law:

“A child-parent relationship means a relationship that exists or did exist, in whole or in part, within the six months preceding the filing of an action under this section.

“And in which relationship a person having physical custody of a child or residing in the same household as the child supplied, or otherwise made available to the child, food, clothing, shelter, and incidental necessaries and provided the child with necessary care, education and discipline, and which relationship continued on a day-to-day basis, through interaction, companionship, interplay, and mutuality, that fulfilled the child’s psychological needs for a parent as well as the child’s physical needs.”

In short, if a grandparent serves as the primary guardian and caregiver, filling the traditional parental role, there may be grounds for the court to award third-party custody. Or at least, if they can show this, they have a sturdier case. Otherwise, the court isn’t likely to consider a grandparent’s claim.

Oregon doesn’t limit these third parties to grandparents or even a child’s blood relations. Anyone with an established child-parent relationship can file for custody. The rules governing this are, understandably, a bit different.

“[A] relationship between a child and a person who is the non-related foster parent of the child is not a child-parent relationship under this section unless the relationship continued over a period exceeding 12 months.”

Another common concern involves extended stays while the parents are away.

This situation frequently arises when single parents deploy in the military. It also pops up when parents travel for extended periods of time and leave kids with grandparents.

If you watch a grandchild for an extended period of time, the court can bestow temporary power of attorney. In cases like these, it’s advisable to take this step.

In Oregon, parents can give others the right to take care of their children for up to six months.This includes grandparents.

Granting temporary power of attorney doesn’t forfeit the parent’s rights. It does, however, allow a short-term caretaker to make the necessary decisions to preserve the child’s well-being.

Granting temporary power of attorney doesn’t necessarily require court involvement. However, you must understand the implications of giving decision-making power to another person. The choices that individual makes carry consequences, financial and otherwise.

Once a parent grants temporary power of attorney, they can revoke it at any time.

The parent has the right to take the child back at any time. If the document doesn’t specify a time frame, power of attorney expires after six months.

Oregon also has a third-party custody statute. This provides for an involved individual to pursue court-ordered visitation or custody. While this frequently applies to grandparents, the law doesn’t limit it to them. This statute applies to other family members or parties who have a legitimate claim.

Related Reading: Child Custody: The Best Interests of the Child

When Can a Third Party File For Custody?

Again, the court generally views living with their biological parents as the best option for children. But that doesn’t mean it’s true in every situation.

If living with their birth parents puts a child in harm’s way, the court may grant custody elsewhere. This is most common in cases of neglect and abuse.

Being awarded custody, especially against the objections of a present legal parent, is no easy feat.

The grandparents, or another third-party, need to prove that they truly represent the child’s best interests. They must rebut the presumption that it’s always better for a child to live with his or her parents.

How much the court weighs a particular component varies from case to case. Other elements and evidence are also up for consideration.

At a basic level, taken as a whole, your case needs to demonstrate that the legal parent isn’t acting in the child’s best interest. You must also demonstrate that a change in custody represents a substantial positive shift.

But just because you satisfy these points doesn’t mean the court will automatically rule in your favor.

Judges and the law give a great deal of credence to the parent-child relationship. There are many cases where, for instance, grandparents were the primary caregiver for six months or longer, but the court still denied a child custody claim.

Even if grandparents don’t pursue child custody, visitation is another avenue to remain in the lives of grandchildren.

Like with custody, if there are issues with the parents or guardians, you have to petition for visitation.

The grounds for grandparents being awarded visitation in Oregon are similar to those for custody.

Additionally, the court also weighs whether or not visitation interferes with the custodial relationship.

Third-Party Rights When One Parent Has Primary Custody

Generally speaking, both legal parents have equal rights to be part of a child’s life. But if the court awards one parent greater rights than the other, third-party rights may come into play.

Let’s say a grandfather watches his grandson while his son is at work. If no court order exists specifically outlining when the child is to spend time with the respective parents, then either parent can take the child from the non-parent on demand.

In this case, the child’s mother could show up and take the child.

However, if a current court order allocates specific parenting time, the other parent can’t take the child on demand.

In the above situation, if the grandfather watches the grandson during the period the court order grants the son parenting time, the mother can’t take the child at will.

If there is a court order laying out who has the child, it’s often useful to keep a copy hand. This way, if the child is in a grandparent’s care and one parent tries to pull anything, you can reference the document.

Third-party custody cases, whether they involve grandparents or not, are complicated.

As with most situations involving children, their best interests takes precedence over parental preference and convenience.