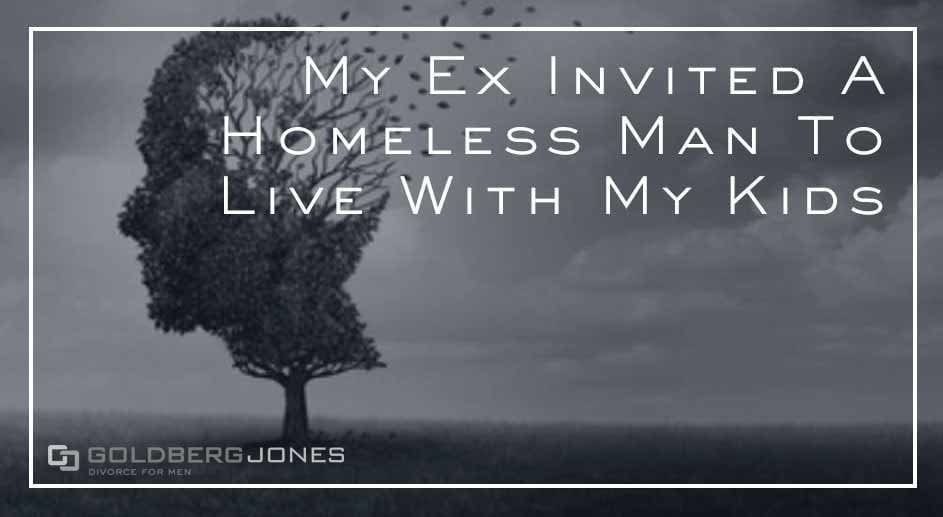 Divorce is hard on everyone, especially kids. No one wants to watch their parents split up. It’s hard for everyone, and it can also turn dangerous. What can you do if your ex’s actions put your kids in harm’s way?

Our founding partner, Rick Jones, regularly stops by the Danny Bonaduce and Sarah Morning Show where he answers listener questions. On a recent appearance, he fielded one of the most bizarre, potentially hazardous situations we’ve come across. It’s tough to explain but take a listen for yourself.

Here’s how the conversation went:

Caller: “I got a one-in-a-million story. My current wife had a spiritual connection with a homeless guy a year and a half ago.”

Caller: “Exactly. He’s been homeless for 9 years. He is a paranoid schizophrenic she’s told me, and I’ve recently found out he did something so bad he had to plead insanity to stay out of prison.”

Caller: “A week after I moved out of the house, basically she moved him into the house around my 8-year-old and 10-year-old daughters.  She won’t give me his last name or anything, and she won’t file for divorce. I’m trying to figure out how I can get custody of my kids through all this, and what proceedings I can do.”

Danny: “I think you’re in pretty good… a tough situation, but if you want to be victorious at the end, I think that’s what’s coming your way, amirite?“

Rick: “Yeeeaaah, what the court’s doing is every day and every week that goes by when you’re doing nothing, the court is wondering why you’re not. So don’t wait for her to initiate it, you’re the one that has an issue here, and your issue is very very relevant and important.

“So what you need to do, is you need to initiate a divorce, along with that, do what’s called a motion for temporary orders. That basically says, ‘Here’s what’s going on.’ You can be in court within two weeks and get a court to address the issue of whether they believe it’s safer to have those children in that house with her and him, or safer to have the children with you.“

Danny: “And let me point out, schizophrenia ain’t nothing. That’s something that has to be watched. Because, if you get off your meds for a little while, it’s a paranoid schizophrenic, you know. I don’t want to scare you or anything man, but who does something dastardly and horrifying and is just sitting there eating breakfast when the cops come over. You know what I mean? If he doesn’t know or what to take responsibility for, you should definitely take some action man.”

If you have questions about divorce, custody, or other cases, contact Goldberg Jones at our Portland office.