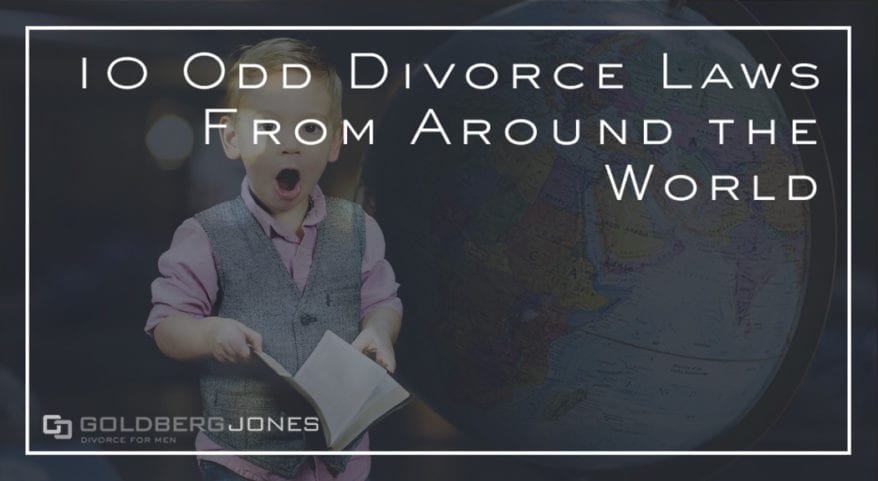 If you’ve ever been through or considered divorce in America, you’re probably familiar with the basic outline of what it requires. Though every case is different, there’s still a general pattern and process. Outside of the U.S., however, divorce laws often look completely different depending on the part of the world.

If you’ve ever been curious about how different countries handle this, we compiled a list of strange, unusual, and just plain odd divorce laws from around the world.

Odd Divorce Laws from Around the World

It wasn’t until June 17th, 1997 that Ireland legalized divorce. The Irish Constitution of 1937 specifically forbade the practice.

Although Ireland’s constitution prohibits the state from declaring an official religion, it is a majority catholic country. Deep religious beliefs influenced the vote in 1986 when 63.5 percent voted against amending the constitution.

Only when the topic was revisited in 1994 did the law change by the narrowest margin, passing with a small winning vote of 50.3 percent.

2. Last but Not Least

Chile was one of the last countries to legalize divorce in 2004. And conservative Catholic lawmakers made the process difficult.

In order to qualify, the couple must separate for a year. That’s only if they mutually agree; it’s three years if both parties don’t agree.

You can waive the waiting period, however, if you prove infidelity, abuse, abandonment, homosexuality, prostitution, drug addiction, or criminal activity.

Most divorces in Japan are straightforward. The couple wanting to get a divorce only has to sign, seal, and file a one-page form.

It doesn’t even require going to court.

But things get a bit complicated when a divorce involves children. Japan doesn’t have a system in place for joint custody. Child support is given but children from that point forward only see the parent they live with.

In the past, Japan made women wait a total of six months before they could remarry. This law was modified in 2016.

It’s a very different system than what we see in America. According to the Japanese government, it’s used as a way to avoid uncertainty regarding the identity of the legally presumed father of any child born in that time period.

Related Reading: How Long Does Divorce Take in Oregon?

5. India Has the Lowest Divorce Rate in the World

In India, only one percent of marriages end in divorce. Out of 1000 marriages, that means only 13 result in divorce. The practice was only recognized after the Hindu Marriage Act of 1955.

Still, even if the law does recognize divorce, that doesn’t mean the judge will grant the request.

Related Reading: Is the 50% Divorce Rate a Myth?

6. Luxembourg Has the Highest Divorce Rate in the World

Luxembourg has one of the smallest populations in Europe with a population of approximately 500,000. Yet their divorce rate is mind-boggling 87 percent.

In order to end a marriage in Luxembourg, the states both parties must be over the age of 21 and married for a minimum of two years. Also, despite the divorce rate being so high, the population rate in Luxembourg grows exponentially every year.

7. You Can’t Divorce in Vatican City

Vatican City is a Catholic-run city-state governed by the Pope. Deeply Catholic as it is, it does not allow citizens to divorce. Surprising very few people.

The Vatican is the smallest country in the world, covering approximately 100 acres with a permanent population of 842 all-Catholic residents. The majority of those who live in Vatican City are priests and the Pope’s staff.

8. Most Common Reasons for Divorce

While rates vary from country to country around the world, there isn’t much variance when it comes to reasons why people divorce.

According to the records that the United Nations and other world organizations keep, the most common reasons people divorce are:

Related Reading: What are the Grounds for Divorce in Oregon?

In most countries, the divorce process can take years. However, in Australia’s Aboriginal community, all a woman needs if she wishes to end her marriage is to say “I do” to another man.

Alternatively, all she needs is to ask her current husband for a divorce and if he says yes, the marriage is simply over.

10. Divorce is Not Allowed in the Philippines, Yet?

The Philippines is the only UN member state with no legal provision for divorce inside the country. It’s the only country, aside from the Vatican, that still doesn’t allow the practice.

Annulment is allowed under certain instances, such as for Muslims who wish to divorce, but Muslims only make up 5% of the predominantly Catholic population.

Though divorce laws in the Philippines haven’t changed muhc since 1949, there have been steps made. In 2018 a divorce bill passed in the House of Representatives. In 2020, the debate still continued.

Just last year, in August of2021, the House approved a bill allowing for “absolute divorce.” This was a huge stride for the people of the Philippines, though it still faces significant opposition.

Fun fact: In Delaware, you can get an annulment if your marriage was based on a dare. No joke.

“One or both parties entered into the marriage as a jest or dare.”

So, if you and your pals get a little rambunctious one night and start daring each other to do things, and one of those is to get married, the fine state of Delaware has your back. We all know sometimes jokes go too far, so that’s nice to know, isn’t it?

Know of any other strange or interesting divorce facts or laws from around the world? If you feel like sharing? Please leave them in the comment section down below.