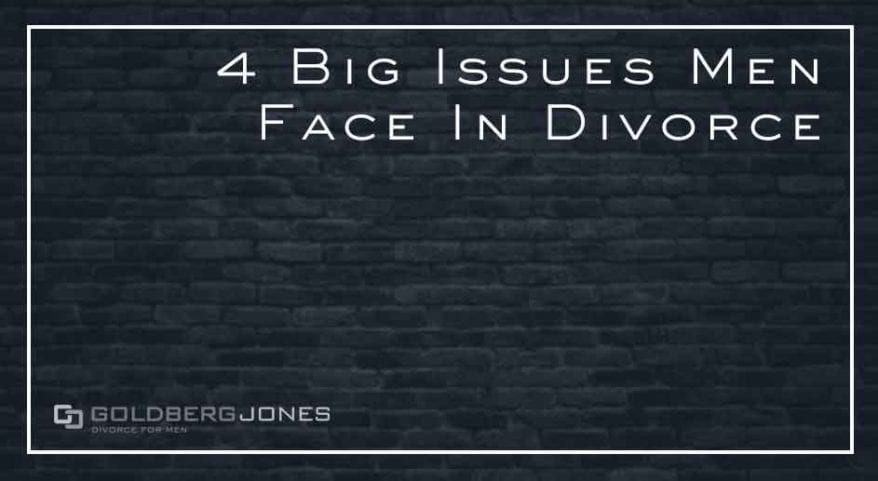 Divorce is not easy for anyone. It may be the right choice, it may be what needs to happen, but that doesn’t make it simple or comfortable. Men and women face a number of different issues during the dissolution of a marriage, from the tangible, concrete, down and dirty details—things that can be measured and accounted for, like money and property—to those that are much less quantifiable, like the emotional stress and pain of separation.

For men, the prospect of divorce brings with it a unique set of complications, problems, and issues. Though ending a marriage and moving forward with your life can be a liberation, the process may also come with consequences, both expected and otherwise.

Statistically speaking, women file for the vast majority of divorces. According to one recent study, wives initiate nearly 70%. One way to look at what this means is that many women appear to be coming to terms with the death of a marriage before it is officially over, whereas men may be left to do so during and after the fact.

Practically speaking, if your wife files for divorce, and it comes as a surprise, it can indicate that she is already on her way to coping with the emotional impact. You, on the other hand, may have to manage an emotional rollercoaster while also dealing with the day-to-day realities of going through this separation.

Further complicating matters are the social constructs that say men are supposed to bottle up emotions so as not to appear weak or somehow less manly. Men are stereotypically strong and silent and don’t outwardly express their feelings. When dealing with what can be an incredibly upsetting, even excruciating situation, attempting to keep a stiff upper lip and pretend everything is fine when it isn’t can be difficult and unhealthy.

Still, many men opt to suffer in solitude instead of seeking out the consolation of friends, loved ones, or even professionals to help process this grief.

Divorce can deliver a chaotic mix of feelings, including guilt, anxiety, and even fear. Self-esteem and self-worth can take a significant hit. Though these responses are not exclusive to men, this can be a heavy weight to bear, one that is hard to measure, and one that too many men attempt to carry alone.

If there are minor children involved in the dissolution of a marriage, the situation becomes even more complex. When the kids come into play, it can intensify a strained, nerve-wracking situation, and further complicate what may already be a tricky, delicate process.

In the case of many divorces, mothers wind up with majority custody. For a father to become the primary guardian, he often faces a long, uphill battle. Being separated from your kids can be tough and painful, which may continue to feed into sensitive emotional issues.

Going from seeing sons and daughters regularly to every other weekend or only on prearranged days, is a huge change, one that can be heartbreaking. Especially if this physical distance leads to an emotional gap. It can be much more demanding to maintain a close relationship and bond with your children if you’re not often able to see them and spend time with them.

In many cases, this loss can be just as traumatizing, if not more so, than the actual divorce. However, it is also imperative to keep their well-being and best interests in mind. No matter how contentious or bitter your split, it’s important not to use them as pawns, bargaining chips, or for petty acts of revenge. No matter the state of the relationship between you and your ex, kids need a sense of stability and security, and to know that their father loves them.

The financial burden of divorce can be substantial. Just the process of dissolving a marriage may very well be costly. There are legal charges to take into account, and attorney’s fees can add up quickly.

Beyond these expenses, your final settlement may order you to pay off all or part of a debt that was acquired during your marriage. At the end of the day, joint savings, property, and assets will likely be divided between you and your former spouse, leaving you fewer resources and much less capital than before.

In custody cases, shared homes often go to the custodial parent. If that is the wife and mother, you may wind up being saddled with the cost of moving, replacing items like furniture and appliances, and more incidental expenditures.

When there are kids involved, child support may prove to be a huge expense. The same goes for situations where spousal support is awarded to you ex. Additional child care costs, health insurance premiums, and even changes in your tax status may further bite into your budget. Moving forward, balancing your finances and accounting for all of these new expenses may become more important than ever.

In the midst of drastic change and having your life uprooted in dramatic fashion, one of the issues men face is increased health concerns after divorce. We talked some about the emotional impact, but following a split, men have been shown to be at an elevated risk for hypertension, heart disease, and even cancer, among other concerns.

Getting back out there after divorce is no easy task, and moving forward is a challenge. The loss of a wife, of a partner, and possibly children, can be monumental, even crushing. Facing a new, uncertain future, it’s easy for men to sink into depression and to turn to alcohol, drugs, and other high-risk behaviors to fill a void. Suicide rates tend to increase in men in the wake of divorce.

While that may be the more extreme end of the spectrum, it’s easy to lose motivation to exercise, eat right, and generally take care of yourself. Making sure to maintain your physical and mental welfare in these tough times may be a priority worth setting.

These are just some of the issues men face after divorce. Things are changing out there in the world, though it is a gradual process. Social roles are evolving. Men are no longer always expected to be the sole bread-winner, or to be stoic and stone-faced when confronted with deeply painful, emotional realities. Stay-at-home dads are increasingly common, and child-rearing is no longer the exclusive domain of mothers.

This shift is an ongoing progression, but it is being reflected in practical ways. Court decisions increasingly recognize the importance of having both parents in a child’s life, and men and women are on more even footing when it comes to custody than ever before. There is also an ever-increasing pool of services and resources for men going through and dealing with the aftermath of divorce. This ranges from support groups to lifestyle blogs to professional therapy.

Divorce can be a trying, difficult time, and there are a number of issues men face. These can be tricky times, but one way to make your case flow as smooth as possible, and to minimize some of these concerns, may be to enlist the help of an attorney. An experienced lawyer can help steer you through the legal process, and may have suggestions to help look after other areas of your life. They’ve been there and seen this, and their advice may prove to be incredibly valuable.

10 Horror Movies To Watch With The Kids This Halloween