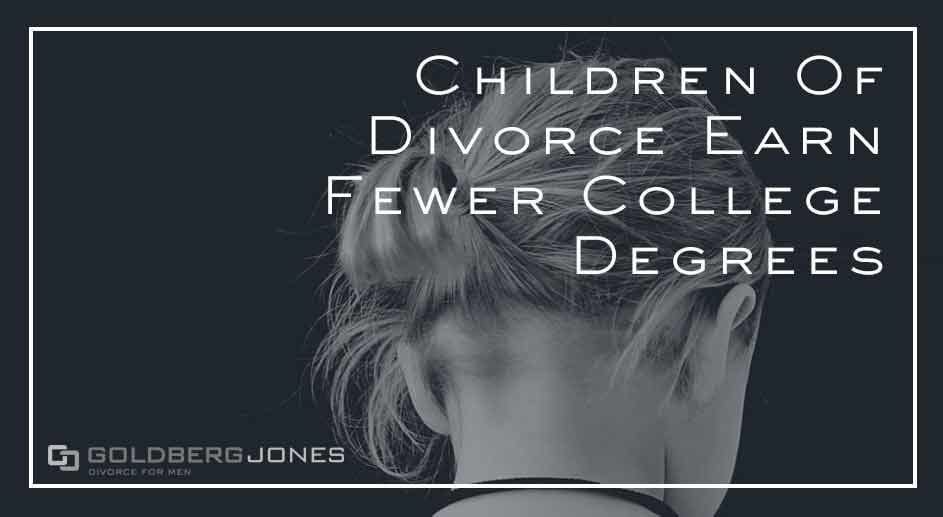 Divorce has a huge impact on your life. It often throws your entire existence into upheaval. But it doesn’t only affect you. Children are especially susceptible to the lingering effects. One recent report indicates that children of divorce are much less likely to earn college degrees.

According to a new study from Iowa State University, children of divorce are less likely to pursue and obtain a four-year or graduate degree.

Researchers analyzed data collected from thousands of subjects between the ages of 26 and 32. 50% of children with married parents obtain a bachelor’s degree or higher. On the other side, only 27% of children of divorced parents reach the same level of education.

Specifically for graduate or professional degrees, the breakdown is 20% and 12% for those with married and divorced parents, respectively.

The authors of this study note the significance of this as more and more jobs have elevated educational requirements, especially advanced degrees.

As is so often the case in these situations, there are more factors in play than just divorce. But there are links. The team also looked at the education level of the parents as well as social capital, as the parent’s emotional investment in their kids. They found that parents who stayed married were generally more educated than those who divorced and that there was a significant difference in income.

Susan Stewart, a sociology professor at ISU and a co-author of the study, notes that divorce often has a substantial impact on finances.

She says, “You are essentially starting over and much of the income that would have gone to a child’s education is sucked up with all the transitions that are part of the divorce.”

In some cases, this limits a child’s access to post-secondary education.

As you can probably guess, the age of the children when their parents divorced also impacted their likelihood of continuing education. Children who were older than 18-years-old when the marriage ended were 35% more likely to get a college degree than those who were under 18 or still lived at home.

Again, this makes a great deal of sense. 18 is the age when most children move out, start college and the rest. Once that process has begun, it’s probably easier to continue.

Many are now responsible for supporting themselves financially. If they live elsewhere, they may not witness as much of the conflict that leads to divorce. It’s likely much less traumatic and distracting if you don’t see it every moment you’re at home.

Older kids are also more mature and better emotionally equipped to deal with divorce and the fallout. What This Means For Children of Divorce

What this means for children of divorce is that they may be at a disadvantage when it comes to finding jobs in the future. The study cites the Bureau of Labor Statics findings that indicate that jobs requiring a graduate or other professional degrees will rise as much as 17% from 2016 to 2026.

Of course, it’s important to take numbers like this with a grain of salt. Just because a child’s parents divorce, that doesn’t automatically mean they won’t go to college or achieve high levels of education.

Divorce is so common that many children see their parents split up in college and grad school. In the study, one of the researchers even mentioned how many of her fellow students were children of divorce.

More than anything, this illustrates the care you need to take with children in divorce, especially younger kids. As difficult as divorce is for you, it’s just as taxing for your kids, if not more so. It’s important to look after yourself and consider your own needs during divorce and beyond. But it’s just as vital to look after your kids and think about what’s best for them. Divorce upends their life, too, and the impact lasts a long time.

If you have questions about your case or need to talk to a divorce lawyer, contact Goldberg Jones. Our Portland office is here to help.