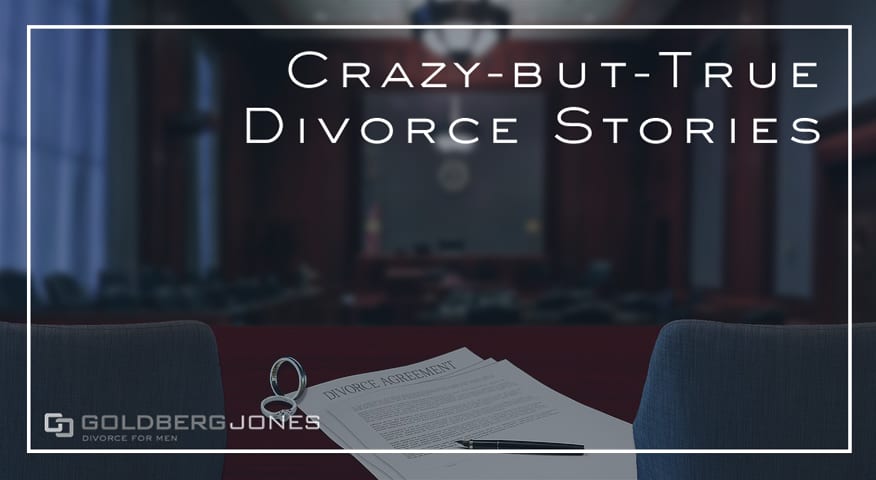 Ask a divorce lawyer and they will say they have seen it all. Extreme prenups, small annoyances that led to breakups, and petty disputes that led to thousands of dollars in legal fees.

There are some crazy divorce stories that need to be shared just for the sole purpose of saying to yourself, “My life may be crazy, but at least it’s not that crazy.”

If you’re going through a divorce and things are getting out of hand, take a look at these and find comfort that your case isn’t this crazy.

People divorce for many reasons, some of which seem very strange to outsiders. Some seem so small and insignificant you have to wonder why they went through the effort. What seems minor to one person may be the straw that breaks the camel’s back for another.

Most people believe that once you have been married for a while, you know your spouse. 73-year-old Gayle McCormick thought so. Yet she divorced her husband of 22 years when she found out he voted for Donald Trump. She claimed, “I felt I had been fooling myself. It opened up areas between us I had not faced before.”

Seduced by a Witch

In a more bizarre turn of events, an Italian man in 2017 reportedly filed for divorce after witnessing his wife levitate. He claimed she was possessed by the devil. Perhaps even weirder, the court granted the divorce on those grounds.

The Wife Who Couldn’t Let It Go

Then there are some instances that are just plain funny. In 2014, a 29-year-old woman left her husband after he confessed to her that he didn’t like the movie Frozen.

He stated he, “Didn’t really care for it, personally.” This was enough of a reason for her to pack her bags.

Related Reading: How Adultery Can Affect Divorce In A No-Fault State

Some couples just want to fight and will argue about anything in a divorce. There are cases where spouses rack up thousands of dollars in legal fees fighting over minor possessions. Most of the time, it would be cheaper to buy a new one than what they pay their attorneys.

One man was at such odds with his soon-to-be-ex-wife that just the thought of her having his toolbox sent him into a rage. He asked for temporary use and possession of the toolbox during a $3,000 hearing, for tools worth $500. His attorney tried to explain that for what he was going to pay, he could easily buy a new, top-of-the-line set. And he wouldn’t look so petulant to the judge. Apparently, that argument didn’t take.

These Rocky Delights Have Rocky Ends

In another case, the husband, who had been having an affair, agreed to buy out the wife’s interest in their home for more money than the wife would have received if she had kept the home and sold it herself.

When the couple appeared in court to finalize the divorce, the wife, who had previously agreed to be bought out, refused to sign the papers unless the husband gave her every landscaping rock surrounding the house. She didn’t want to be paid the value of the rocks, she wanted the actual rocks.

She claimed they were a gift from her father and wanted her ex to rip them all out and give them back to her.

Some Rings Are Worth Fighting For

Some crazy divorce stories have sweet endings despite hectic beginnings.

This case revolves around an engagement ring. The ring originally belonged to the husband’s side of the family, but the wife wanted to keep it to give to their daughter. This resulted in a lengthy, heated debate between the two.

They reached a compromise and were about to sign the documents. But then the husband’s attorney asked, “What if the daughter doesn’t want it OR DIES?” That question set things off again.

In the end, they finally found terms they could agree on. If the daughter didn’t want the ring, or couldn’t use it, they would sell it and donate the funds to charity in her name. Fortunately for everyone, she did want the ring.

Prenuptial agreements are pre-marriage contracts that lay out who gets what in the case of a divorce. They’re meant to be reasonable documents that help spouses protect themselves in the case things don’t work out. However, like they so often do, celebrities often take the idea and run with it.

Celebrity prenups can read more like a laundry list of requirements to ensure marital bliss with the rise of what is commonly referred to as “lifestyle agreements.” Some of the more outlandish clauses include weight. One spouse must maintain their current weight, lose weight, or face a financial penalty.

Some couples want prenups to require a certain amount of parenting time with shared pets. There are also agreements that dictate specific behavior like one party has to take out the garbage or does all the grocery shopping.

If you can imagine it, a celebrity has probably tried to put it in a prenuptial agreement. Whether or not these outlandish terms are enforceable, however, is another issue.

Power couple Jay-Z and Beyoncé supposedly have a prenup that dictates that in the case of divorce, Jay-Z must pay Beyoncé $1 million a year for every year they were married after the first two years of marriage, $10 million for a new home, and $5 million for each child she has with him.

Infidelity clauses are also popular. Justin Timberlake and Jessica Biel allegedly have a clause in their prenup that states if Timberlake is unfaithful, he owes Biel $500,000 dollars. While that price is not as steep as one might expect, you argued it’s more about the principle than the money.

There are also celebrity couples who use prenups to ensure they end up wealthier in the event of a divorce. Tom Cruise and Katie Holmes had a prenup that entitled Holmes to $3 million for every year of their marriage.

At least up to year 11. In that case, she would have been entitled to half of Cruise’s entire fortune. They didn’t reach the 11-year mark, but they were together for five years which entitled Holmes to $15 million dollars.

Things can get heated and crazy during a divorce. It’s easy to rationalize that things like arguing over a box of knick-knacks no one actually cares about is the best course of action. In most if not all cases, it’s probably not. It’s important to have perspective and be realistic. If you can’t on your own, it may be in your best interest to hire a divorce lawyer.