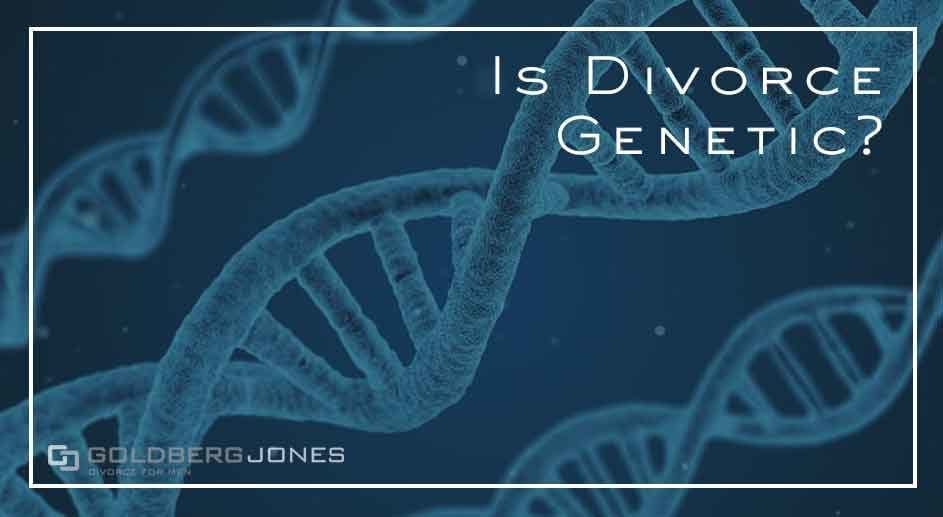 Couples divorce for an endless number of reasons. People cheat, lie, and change over time. The reasons are as different and wide-reaching as the reasons people fall in love and get married in the first place.

But are certain people biologically predisposed to divorce? Is divorce genetic? Do parents hand divorce down from one generation to the next?

That may sound crazy, but one recent study suggests genetic makeup plays a much larger role in divorce than previously thought.

By now, it’s well-established that children of divorce face a greater risk of divorce themselves. This often brings up the subject of nature versus nurture, and which plays a larger part in these circumstances.

In an article in Psychological Science, titled “Genetics, the Rearing Environment, and the Intergenerational Transmission of Divorce: A Swedish National Adoption Study,” researchers from Virginia Commonwealth University joined forces with a team from Sweden’s Lund University to investigate genetic factors in divorce.

Talking about the project, Jessica Salvatore, Ph.D., the study’s first author and an assistant professor in VCU’s Department of Psychology, said, “We were trying to answer the basic question: Why does divorce run in families?”

Addressing the results, she added, “Across a series of designs using Swedish national registry data, we found consistent evidence that genetic factors primarily explained the intergenerational transmission of divorce.”

Together, the researchers examined data from Sweden’s national registries, looking at adoption and divorce. Salvatore explained the methodology of their study, the biggest of its kind to date, saying:

In short, if adoptees take after their biological parents, it points to genetic factors. On the other hand, if they follow in their adoptive parents’ footsteps, it indicates environmental influences.

Across the data, tens of thousands of cases, the researchers found significant compelling evidence that hereditary genetics play a substantial role in whether or not people are predisposed to divorce.

Adoptees proved more inclined to follow the behavior pattern of their biological parents than their adoptive ones.

Why Is This Important?

What this offers is a different perspective on divorce. Up to this point, most thinking on this topic skews heavily towards the environment playing a bigger part, that children watching parents divorce are more likely to do so themselves.

“Previous studies on why divorce runs in families […] have really focused on the pernicious effects that growing up in a divorced household has on one’s own marital stability later in life. [But] in our study a different picture emerged.”

Previous thinking suggests children of divorce are more likely to divorce because of what they see and experience. They witness their parents fight, deal with the strain of a relationship, and ultimately end their marriage.

This study, however, places emphasis on a child’s shared genes rather than watching parents split up. Instead of passing divorce down psychologically, this research indicates there may also be a hereditary component to consider.

Related Reading: How to Ask for Divorce

What Does This Mean?

Where Salvatore and her colleagues see their study, having the biggest impact is in therapy. In her opinion, professionals working with couples may want to explore other strategies.

For instance, instead of concentrating on interpersonal communication skills and enhancing commitment, she suggests, “addressing these underlying, personality-driven cognitive distortions through cognitive-behavioral approaches” may prove more fruitful.

Also, this doesn’t necessarily mean you’re doomed to repeat the patterns of your biological parents. Just because they divorce, doesn’t mean that’s your predetermined fate. According to this research, you may, however, be more likely to follow suit.

More than anything, this study presents an intriguing new perspective on divorce. There may be more going on than immediately meets the eye. It will be interesting to watch this research grow and evolve, and what, if any, impact it has on marriage, therapy, and divorce.