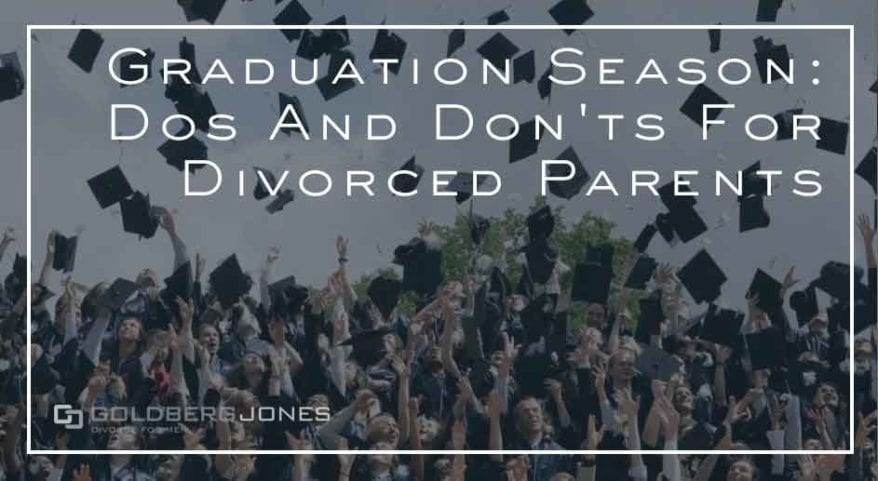 As the school year winds down, graduation takes center stage for many families. Finishing high school represents a significant milestone. It often signifies the end of one chapter in a young person’s life and the beginning of the next. For this, among other reasons, it’s important to celebrate. But like many other situations, graduation season gets tough when it involves divorced parents.

When parents aren’t together, graduation often turns into a minefield. Hopefully, both parties are mature enough to put aside petty differences and celebrate the occasion. After all, it’s about the kids, not you. That’s not always as easy as it sounds, and these encounters may lead to fights and conflict. But here are some dos and don’ts to keep in mind for divorced parents during graduation season.

Do: Talk To Your Ex

There are ways to minimize it, but over the course of graduation celebrations, you’ll likely have to talk to your ex at some point. You don’t have to sit next to each other during the ceremony, but you’ll have to take pictures and generally tell everyone how proud you are. Remember, play nice. Be on your best behavior. It’s one day, so try to make it as easy as possible for your graduate and set a good example.

On the other side of that, don’t go around a graduation party badmouthing your ex to everyone who will listen. Especially to your children. First off, that’s petty and not a particularly flattering look. Second, it’s going to have a negative impact on your child’s enjoyment. This is an important day; consider how your actions affect them. Don’t do anything to make them uncomfortable, put them in an awkward position, or increase the chance of conflict.

Graduation is a time to celebrate. So go, have fun, let your children know you’re proud of them, and help mark the transition from one phase of life to the next. Ideally, this should be enjoyable for everyone involved: parents, grandparents, family members, and friends of all stripes.

While you should celebrate, don’t celebrate too hard. It’s fine to be festive, but keep it in check. Think about not drinking. Booze may impair your judgment and lead to stress and strife. If you do imbibe, do so in moderation. A celebratory drink is fine. Raise a glass to your graduate, but try to stay away from a celebratory bender.

Do: Go to the Graduation Ceremony

In cases of divorce, many people skip out on events like graduation. When you don’t think you can see your ex without conflict, this often sounds like a good idea. But in this case, it’s usually a mistake. This is an important moment for your child and being there means a great deal. Showing up to recognize the accomplishment shows how much you care and lets them know you support them.

Graduation ceremonies usually require tickets. Don’t hoard them in there aren’t enough for everyone. Both parents deserve a spot at commencement, and both of you deserve a ticket. Split the allotted tickets equally between both parents. There are usually ways to find more, just make sure to take care of this ahead of time so you don’t have to scramble last minute.

Do: Plan a Graduation Party

Parents often throw graduation parties for their kids. This is a perfect time to gather family and friends together to celebrate one of the biggest accomplishments of your child’s young life. There’s definitely a reason for a get together to spread the good cheer far and wide.

Don’t: Plan a Party at the Same Time

Planning a party is great. But if your ex also plans a party, don’t schedule yours for the exact same time. Again, this is a petty move that only leads to more conflict between you two and puts your child in an awkward position. This is his or her day and accomplishment, so don’t force them to choose between parents. Not only does it put your child in a precarious position, it compels other mutual acquaintances to make a similar choice. If you do plan another party, make sure they’re far enough apart so the graduate doesn’t have to rush or overextend.

In some cases, when you divorce, you never have to see your ex again. However, when a marriage involves kids, that’s not usually an option. It’s often hard to make it work, but when you have children, your ex usually remains at least a minor presence in your life.

Graduation is one of the times when the two of you will probably have to come face to face. Just remember that it’s not about you and keep the focus on your kids. Play nice, pose for photos, and do what you must to keep the friction to a minimum. You’ll enjoy the day a lot more, and most importantly, so will your kids.