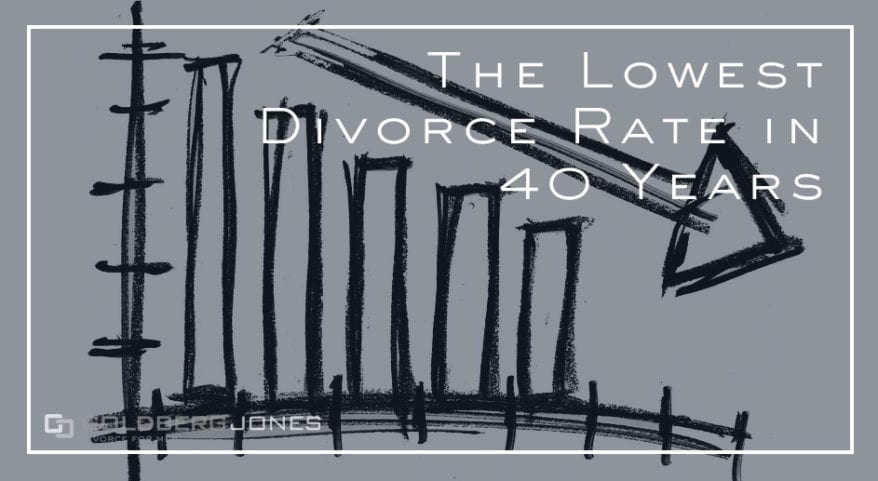 People talk a lot about the 50% divorce rate—the idea that half of all marriages ultimately end in divorce. While that’s not exactly a lie, it’s not exactly the whole truth. The divorce rate is in constant flux. In fact, it’s currently the lowest it’s been in 40 years.

Approximately a million couples threw in the towel in the U.S. in 2017. That’s a big number, but according to a report in the Wall St. Journal, the rate of divorce has dropped substantially over the past few decades.

1979 marked the all-time divorce high. A recent study from Bowling Green University’s National Center for Family and Marriage Research notes that 22.6 out of every 1000 marriages ended in a dissolution. But by 2017, that number had dropped sharply, falling to 16.1 out of every 1000.

The report states, “That’s a decrease of 29% from the high point and the lowest the divorce rate has been in 40 years.”

That’s a remarkable number, but the obvious question remains, why?

Related Reading: Why the 50% Divorce Rate is a Lie

Reasons for the Low Divorce Rate

One of the key reasons the article cites for the drop in the divorce rate is that once married, younger couples are now more likely to stay that way for the long term. The author also notes that the marriage rate overall has also dropped.

And when couples do wed, they’re doing so later than earlier generations. A researcher from Iowa State University notes that in 1963, the average age at which a woman married was 20. By 2017, that had risen to 27. For men that number was 29.

Both of these facts make sense when you consider them in a larger context. Baby Boomers, those born between 1946 and 1965, were coming of age in the late 1970s. One of the largest generations in history, this was also an era where views on divorce drastically changed. For the first time, it was more accessible and acceptable to end a marriage. Due to that and the sheer number of people, it’s reasonable to expect such a spike.

Starting with the Boomers, many of whom married young, divorce became more common than ever. Young couples today are more likely to have grown up in households affected by divorce, or at least seeing divorce as a regular part of life. It’s something they’ve experienced, witnessed, and are aware of. And it’s something they take into account when deciding whether or not to marry.

The co-director of the Center for Family and Marriage Research, Wendy D. Manning, told the reporter, “They don’t want to make a mistake. They’re waiting longer to get married to divorce-proof their marriage.”

So, younger couples tend to put marriage off for later than their predecessors. While earlier generations may have married right out of school, many couples now take other paths. But once they do decide to tie the knot, it’s more likely to stay that way.

In fact, the research found that the divorce rate dropped in every age group under 45 years old. The number from 45-54 did actually jump slightly, from 13 divorces per 1000 marriages to 15 per 1000. After that, however, things change dramatically.

It’s no secret that Gray Divorce, divorce over the age of 50, is on the rise. Google that term to see how many hundreds of articles exist on the topic. Again, much of this comes down to the Baby Boomers.

Addressing the subject, Dr. Manning from BGSU says, “A lot married young. A lot are in second marriages. Second marriages are at greater risk of divorce.”

According to some research, as many as 80% of people who divorce go on to marry again. When looking at second marriages, some studies place the divorce rate as high as 67%. Even higher for third weddings.

People are living longer, healthier lives. As the years pass, and as traditional values evolve, they’re less likely to stay in an unhappy or otherwise unsatisfying marriage for what could be many years. You can divorce when you’re older and still expect to have a long time to live a full, exciting life.

Gray divorce does come with a number of unique considerations. It can impact retirement, long-term healthcare, life insurance, and many other areas.

As the divorce rate changes over time, it’s interesting to track the progress. Life expectancy, changing societal views on marriage and divorce, and more all play a part. What this means for individuals varies from case to case.

Just because statistics say one thing doesn’t mean it applies to every case. Each couple must decide for themselves, and for their unique reasons, whether to marry, divorce, have kids, and all the rest. Numbers paint an interesting picture, but you ultimately have to make these choices for yourself.