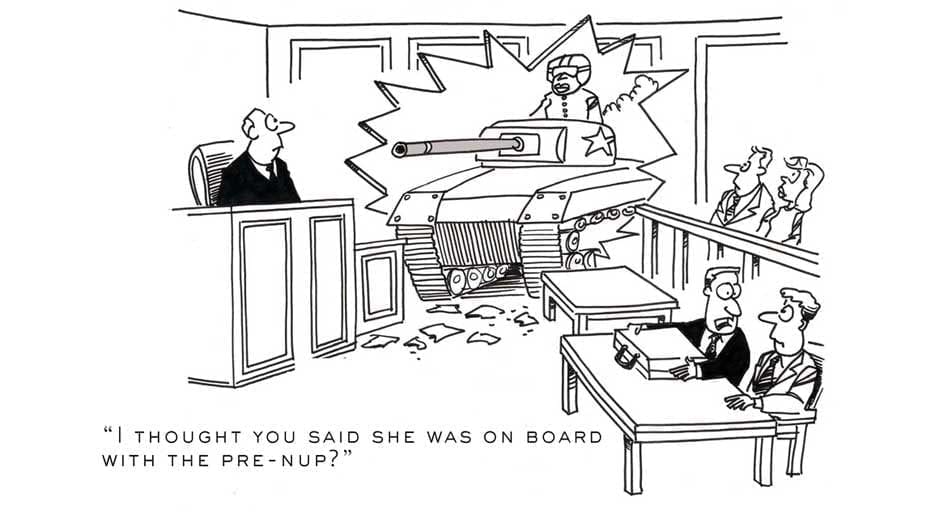 When most of us think of a prenuptial agreement, we think of wealthy couples with more money than we can ever dream of. We’re talking about celebrities, rock stars, professional athletes, titans of industry, and Hollywood A-listers. After all, those folks have tons of assets to protect.

So prenups are just for the super rich, right? Though that’s a common perception, that’s not necessarily the case. At some point before saying, “I do,” you should ask yourself, “Do I need a prenuptial agreement?”

Granted, most of us don’t have mansions, multiple estates, or a fleet of exotic cars, but what we do have is important. Losing part of a pension or 401(k) is a significant blow to our retirement plans. Thousands of dollars to buy an ex out of a mortgage on a home is tough to come by. And our cars may not be Bentleys, but they’re not exactly cheap either.

While the stigma is that a prenuptial agreement is just for marriages where one spouse has a great deal of wealth, that’s not always the case. Even if you’re by no means rich, a prenup still serves to protect what you have in the event of divorce.

No one wants to bet against a marriage, and prenups have a reputation as being a sign of hesitation or uncertainty. However, if you want to make sure to cover yourself in the event a marriage doesn’t work out, or if you have specific assets you want to safeguard, it may be the smart strategy.

WHAT IS A PRENUPTIAL AGREEMENT?

Technically speaking, a prenuptial agreement is a contract a couple enters into before marriage. It stipulates ahead of time how property will be divided in the case of divorce. Though there aren’t any specific requirements of what a prenup must contain, many couples use a what’s-mine-stays-mine, what’s-yours-stays-yours approach. This way, each party leaves the marriage with what they brought to the table.

The concept of a prenuptial agreement is simple, but like most legal matters, it’s usually much more complex in practice. Topics covered in prenups vary wildly. Beyond the division of property, some people try to include provisions for child custody, spousal support, or even clauses regarding infidelity. Many of these inclusions aren’t legally enforceable and the court may toss them out.

For instance, stipulations in a prenuptial agreement regarding spousal support are generally allowed. However, if there are problems with the document, or the terms skew to drastically in one direction, a judge does have the ability to dismiss them.

On the other hand, things like child custody and child support in a prenuptial agreement are not enforceable. While a couple may try to get ahead of any potential issues in this area, the court has the final say. If the terms of a prenup are reasonable and truly represent the best interests of the child, the final judgment may look like what was put down on paper, but ultimately it’s up to the judge.

DO I NEED A LAWYER FOR A PRENUPTIAL AGREEMENT?

Like with so many legal matters these days, there are a variety of online forms and templates and do-it-yourself resources available to help draft a prenuptial agreement. At the same time, these tend to be complicated, detailed documents that require a specific format. They need to address many areas across both marriage and divorce.

Unless a prenuptial agreement is carefully and accurately constructed, it may not stand up in court. You may save a few dollars in the short term by doing it yourself, but if it fails to protect your assets, you waste a great deal of time and money.

Because of this, it’s probably a good idea to work with a lawyer or at least have one take a look at the paperwork. An attorney can help create a prenup that’s more likely to hold up and carry substantial legal weight.

SO, DO I NEED A PRENUPTIAL AGREEMENT?

Ultimately the question is whether or not you need a prenuptial agreement. This depends on a number of factors, like what you have to protect, if your spouse is open to the idea, and many others. Every situation is different, so there’s no one-size-fits-all answer. But there’s a lot to consider.

Many people think of prenuptial agreements as a pessimistic move or that you’re dooming your marriage to fail. Others think they’re only necessary for wealthy individuals with fat bank accounts. But depending on your circumstances, it may provide an extra layer of security. You hope you’ll never need it, but if you do, you’ll be happy you took the steps.

A prenuptial agreement protects pre-existing assets. You can use one preemptively to do things like shield an anticipated inheritance. If one spouse earns substantially more, it can limit future support payments. When your spouse has significant debts, a prenup may protect you from becoming liable for those. One can also safeguard a business in the event of divorce.

ARE THERE OTHER STRATEGIES TO PROTECT ASSETS?

Instead of using a prenuptial agreement, some people try other means to protect themselves. One common strategy is to keep certain assets or accounts in one name or the other. This can work, but it doesn’t protect you financially in every situation. For example, if you already own a house, you may keep it in your name alone after the wedding. But in Oregon, the state considers any appreciation during a marriage shared property, regardless of who’s name appears on the title. If your home increases in value, that additional sum becomes joint property.

Despite the negative stigma attached, there are many reasons to consider a prenuptial agreement. If the goal is to protect your interests and assets in the case of divorce, it’s certainly worth consideration.

If you’re getting married, congratulations. And if you have questions about whether you need a prenuptial agreement, feel free to contact Goldberg Jones at our Portland office.