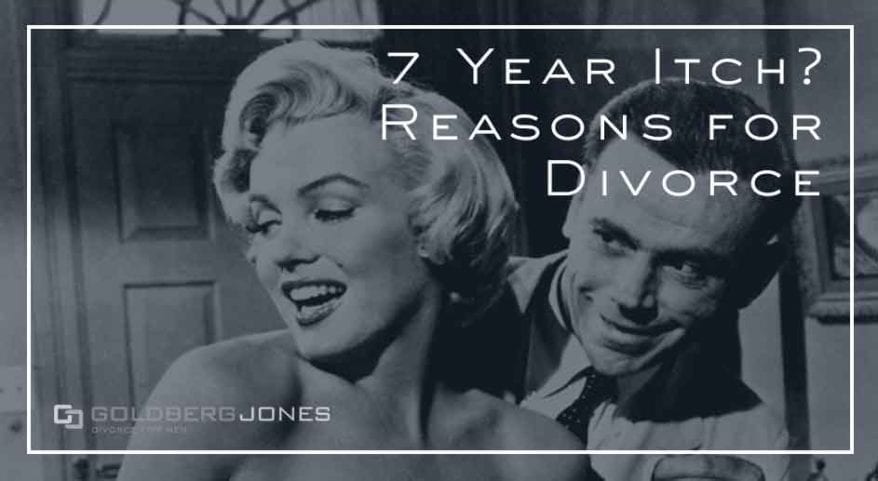 It’s been a few years now, but when Danica Patrick announced she was divorcing after seven years of marriage, headlines screamed about the seven-year itch —also known as a period of marital boredom that is accompanied by an increased likelihood for infidelity. It’s often cited as one of the big reasons for divorce.

Related Reading: Well-Intentioned Advice That can Harm Your Divorce

The term was made famous by Marilyn Monroe’s 1955 film The Seven Year Itch. Digging into the genesis of the phrase uncovers that the magic number seven might be more coincidence than a proven fact.

Over the year, studies have claimed their data proves the seven-year itch. There have been almost as many dispelling the seven-year threshold as a sticking point for marriages. This leaves the jury still out on empirical proof.

In 2009, the Census Bureau reported that the median duration of a marriage to be eight years. (The most recent available data at the time of writing.) But other sources report different milestones as being problematic for couples.

A an article published on the Huffington Post reported a survey of 2000 people revealed the three-year mark was where relationship satisfaction dropped off sharply.

Whether a marriage lasts three years or seven, or some other number of years, the reasons leading to divorce are frequently the same. Money, communication, and misaligned expectations all top the list.

The reasons for divorce are obvious in some cases, but not all. When going through the divorce process, many people struggle to understand why. This is especially true if you aren’t the instigator. Men dealing with divorce often wonder what went wrong.

Related Reading: 10 Odd Divorce Laws From Around the World

Regardless of who started the ball rolling, make sure to face the issue head-on. As divorce attorneys, too frequently we see men try to fix the problem by ignoring it.

Once you make the decision to divorce, take a proactive role in the process.

For some men it can also be helpful to understand how money, communication, and expectations contribute to the decision to divorce.

Money — how much you have, how it is spent, and where it comes from — is often a contentious point in a marriage. The stress of not having enough money can cause an insurmountable burden. An expensive emergency or reckless spending by one spouse often deals a fatal blow to a relationship.

Communication closely intertwines with money issues. Breakdowns here lead to disengagement and detachment. This is often the first step in secretive spending and straying outside the marriage. Which is one of the most common reasons for divorce. When spouses fail to communicate plans, important information, and feelings, it often erodes the base of the relationship.

“People often fail to say what we mean, whether by design or because we just don’t know how. We often misunderstand others, and, to make matters worse, may think we understand them when we don’t.

“We respond to what isn’t being said, and miss what is. Others ‘do’ the same to us, and an innumerable number of arguments and even chronic relationship problems are the result.”

The misalignment of expectations challenges both in the relationship and through the divorce process. If both parties have vastly different beliefs, it leads to a great deal of conflict, which is exacerbated during divorce.

“It is a basic human trait to project our desires and thoughts onto those we are closest to. We tend to expect significant people in our lives to behave in a manner envisioned in our mind.

“Expectations in relationships can be harmful when unspoken ideals are projected onto the other person. Unspoken assumptions and unrealistic expectations commonly sabotage relationships.”