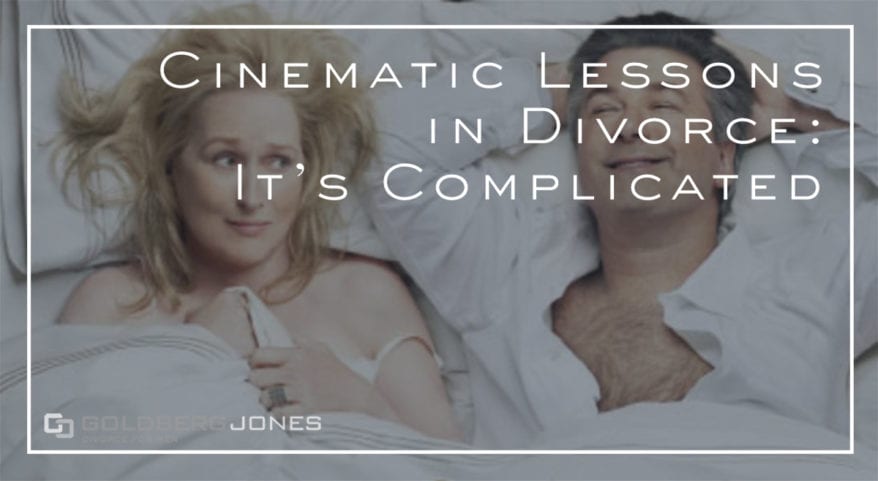 Giving us the dynamic duo, we never knew we needed, director It’s Complicated stars the incomparable Meryl Streep and charismatic Alec Baldwin. Stealing the screen with their chemistry, they play Jane and Jake Adler. A former married couple, they find themselves entangled in a messy affair with each other ten years after their divorce.

Writer/director Nancy Meyers offers a fun, charming comedic romance. In addition, the film offers a glimpse at divorce, relationships, and post-divorce life. It especially focuses on the challenges and issues of older couples. With the rise of gray divorce, we see quite a bit of this sort of thing.

Jane and Jake were married for 20 years. They had three children together before Jake cheated and left Jane for Agness (Lake Bell), a younger woman whom he marries.

Related Reading: What is a Gray Divorce?

In the beginning, like a lot of newly divorced couples navigating their relationship, they could barely stand to be in the same room together. Over time, however, the two come to a place where they can be friends and keep things civil. Much of this is for the sake of their children. Something many parents try to do after a split.

In the years following their divorce, things go well for each of them. Jane owns a successful restaurant, which she loves, and works on a home expansion. Jake, a well-known attorney and loving dad, raises his Agness’ son as his own as they attempt to have another baby. It’s Complicated shows them living life as best they can.

The couple has long moved on from their divorce. Or so they thought.

Jane and Jake, reunite at their son’s graduation party in New York. Agness’ son falls ill, so she misses the family getaway to take care of him, leaving Jake flying solo. During this trip, everything changes.

Once they return home, the guilt sets in. At least for Jane. She dodges Jake’s calls and texts, focusing instead on her home renovation and an architect named Adam (Steve Martin), himself recently divorced.

Jake feels differently about the whole situation. He’s alive and invigorated; he sees things with a new perspective. He can’t stay away from Jane and after his calls go unanswered, he makes a surprise visit to her home.

Jake tells her, “Something real and honest happened.” What happens is they, and many couples should have done much earlier. They have a long-overdue conversation about their marriage.

While married, they both felt rejected, unappreciated, and unheard. Jane admits that, although he cheated, Jake never stopped trying in their marriage and she had given up long before he cheated. But things have changed. Jake feels that their problems have subsided and they have both grown. Both into the people they wanted each other to be and the people they each wanted to become.

Unfortunately, a lot of couples face this problem. Instead of openly discussing their problems and actively trying to find solutions, they suffer in silence, unsure of how to make it better.

Marriage is complicated at any age. It’s important to be clear about your expectations and needs in the relationship. Partners aren’t mind readers and we can’t expect them to know our thoughts.

This is especially important for older couples and those in long marriages. We continually grow and change as people. You’re not the same person you were when you got married. People change, situations change, what you need out of a relationship changes. Open communication can help the relationship evolve along with both spouses.

Though Jake and Jane continue their affair for a time, real-life and old issues interrupt. Jake stands her up on date night, only to apologize after the fact. Their respective relationships continue to develop and get in the way.

When it All Blows Up

Things come to a head when Jane invites Adam to her daughter’s wedding. Jake is hurt and jealous and can’t look away, a fact not lost on his wife. Agness confronts him and he winds up leaving.

It’s Complicated comes to a climax when the entire family is together; Jake, Jane, and the kids. The kids are confused, feelings get hurt, and no one is entirely sure what to make of the situation.

This also often happens often in cases of divorce. It’s a complicated, emotional event. Just because it’s been years, doesn’t mean there aren’t still deep, messy feelings. Especially when a couple has children, you can’t simply cut the other person out entirely, there’s bound to be some level of contact.

Without meaning to, we often drag the closest people to us into our messes. They then have to deal with the fallout.

Ultimately, Jake and Jane don’t get back together. As she says, they, “Needed to see if there was anything left before she let go. They had something extraordinary, but they no longer fit together.”

Many couples do something similar, they make one final try to make things work before calling it a day. It makes things complicated when it’s so far after the fact. Especially now that Jake has a new wife and family.

We often wish we could go back and relive a certain time, but we can’t. Life can be painful as we deal with tough situations and it’s hard to face that, but much like the characters in It’s Complicated, we must learn to move on.

Do I Need A Divorce Lawyer If My Spouse Has One?