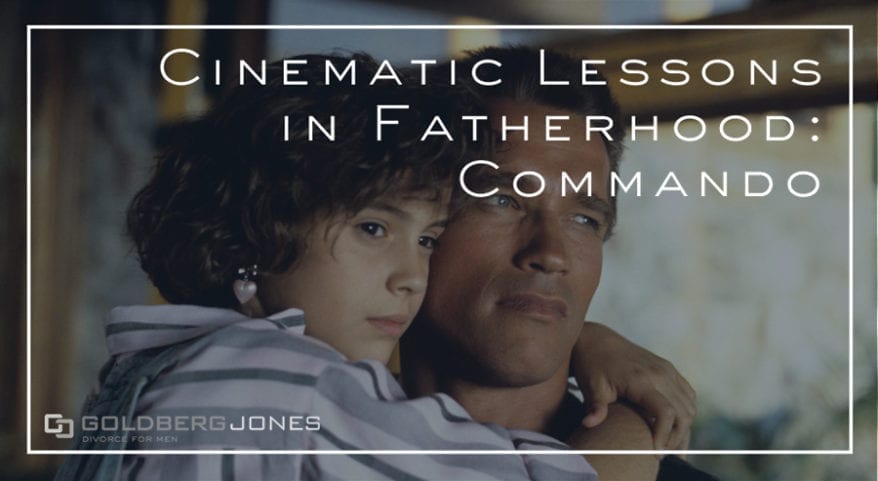 A retired Delta Force operator, John Matrix frequently packs a rocket launcher, a tactical vest covered with grenades, and enough firepower to invade the small, fictional Latin American nation. He’s not necessarily the guy who first springs to mind when you think father-of-the-year. But this is precisely what we get in director Mark L. Lester’s 1985 film, Commando.

Starring the future governor of California, Arnold Schwarzenegger, Commando is a quintessential ‘80s action flick. Matrix is a prototypical Schwarzenegger character from this stage of his career. Still sporting his massive, bodybuilder physique (seriously, he carries a tree), he’s former military, a woodsman, and basically an all-around manly man.

But Matrix is also something we don’t often see from Arnold Schwarzenegger, he’s a father. We’ve seen him as an action-centric dad before in movies like True Lies, but usually, it’s in more comedic fare like Junior or Jingle All the Way where the Austrian actor gets the opportunity to portray a family man. (He does play a caregiver, though a reluctant one, in Kindergarten Cop, and as the Terminator franchise goes along, he becomes a de facto father figure, explicitly so in the most recent installment, Terminator: Genisys.)

And Matrix isn’t just a father, he’s an awesome father. In many respects, he’s everything a father should be. A single dad (there’s no mention of what became of the mother), he dotes on his young daughter, Jenny (Alyssa Milano, fresh off of filming the first season of Who’s the Boss?). Putting her needs ahead of his own, when we first meet him, he’s set his own successful military career to the side in order to raise his daughter, make sure she comes up right, and give her a normal life away from the mayhem and danger of his previous occupation.

That’s Dad 101 right there. The father and daughter have a sweet, if at times a wee bit too-wholesome-to be-believable relationship. They frolic in the pool at their secluded mountain home, they eat ice-cream and laugh, they feed deer together. Matrix even teaches Jenny useful life skills, like how to throw a proper elbow and escape capture by bag guys. You know, normal, practical kid stuff.

Sure, he does go on a kill-crazy rampage for much of the film. He cuts a bloody swath through the criminal underworld of Southern California, the ranks of mercenaries-for-hire, and even Central American politics. And yes, he may take it upon himself to invade the sovereign foreign nation of Val Verde. (The fictional state also pops up in other movies of this ilk and era, like Die Hard 2 and Predator).

Those are drastic measures to be sure. But the only reason he undertakes such endeavors in the first place is because a nefarious former dictator kidnaps Jenny. This villain and his mercenary goons attempt to use her as leverage to get Matrix to put his particular set of skills to use for their own gains. Unfortunately for this cadre of rogues, he employs his talents against his enemies and the result is, well, explosive.

Matrix doesn’t want to do all of this, to resort to violence. At the start of the movie, he’s not actively looking to blow up anything. This is a case where he’s dragged kicking and screaming back to his old life, one he thought he left behind, because he has no other choice. Commando may be macho escapist junk food cinema, but damn if it isn’t a total blast, which is a big reason why it’s become a cult classic. Just because it’s empty movie calories doesn’t mean there’s not something substantial buried beneath all that butter, fat, and salt. In this particular instance, that just so happens to be an affectionate father-daughter relationship, and a tactically trained, ex-military badass who’s also a devoted, loving parent we could learn a few things from.