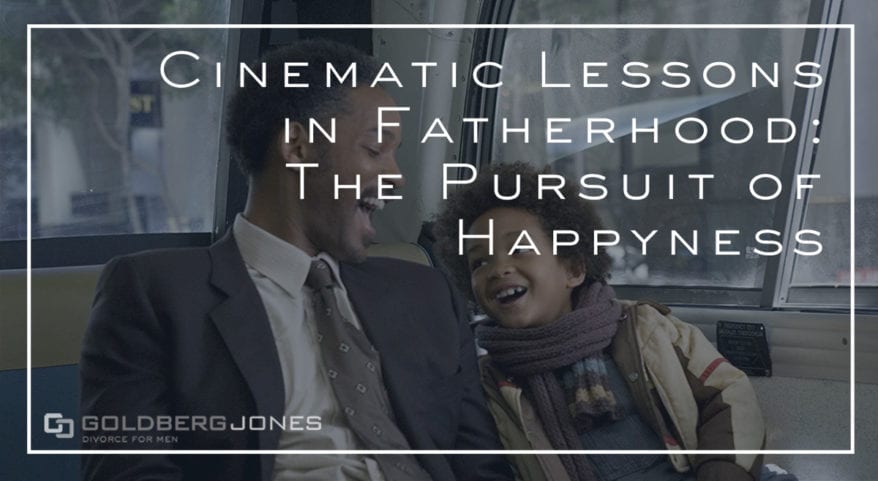 TV and movie fathers may be (generally) fictional, but they can still teach you about what it means to be a parent. One of our favorites is in The Pursuit of Happyness [sic].

There are those dads you admire, those you use as examples of what not to do, and others you respect for their ability to grow.

There are classic examples of the nuclear family, like Ward Cleaver in Leave It to Beaver. You have funny, over the top dads, like Clark Griswold in the Vacation movies.  Darker examples, like Liam Neeson in the Taken films, demonstrate the great lengths parents are willing to go to for their children.

The question, “What does fatherhood look like?” has no single answer. The myriad depictions in movies and on TV illustrate this fact. One of our favorite movie dads, however, is Chris Gardner, played by Will Smith in the 2006 film The Pursuit of Happyness. What can his trials, troubles, and sacrifice teach us about fatherhood and being a great dad?

Smith plays Chris Gardner, a real life businessman and motivational speaker. In the 1980s, he was homeless while also raising his young son. Out of work and out of money, he had nothing but grit and determination on his side when it came to providing for his son.

In 1981, Gardner, then a salesman, sank his entire life savings into an investment opportunity. He thought it was going to be the big break that led his family to financial stability. Instead, it tanked, and they wound up even worse off than before.

While struggling to crawl out from under the bad investment, Gardner met and impressed a businessman named Jay Twistle. This run-in led to an unpaid, six-month internship with a brokerage company. Gardner found himself competing with 20 other much-younger interns for a single job. While a big opportunity, the pressure broke Gardner’s already strained marriage.

Choosing to Be A Single Father

As Gardner’s wife threatened to leave, his one request was that Christopher, their son, stay with him. Even struggling as he was, he knew that he could provide more stability and a better future. He told his wife, “Christopher is staying with me… You know you can’t take care of him.”

Though a painful separation, he recognized that uprooting the child and relocating him to New York with his mother wasn’t in the child’s best interests.

Even though he knew it would be difficult, Chris chose to stay and be a father. This offers a lesson for all parents. Being a parent is much more than just sharing DNA, it’s also a conscious, active decision. It’s a choice you make every day. You choose to show up, do your best, and provide for your children. The Pursuit of Happyness demonstrates this point perfectly.

Doing Whatever It Takes

One of the main takeaways from The Pursuit of Happyness is that no matter his circumstances, Gardner always strived to care for his son. They were evicted with $21.33 to their name; they bounced from shelter to shelter, and when they were full, they spent the night in a BART station bathroom. Despite the near-insurmountable obstacles, Gardner never let that deter him from being the best possible parent. No matter what, his son remained his number one priority.

At his internship, Gardner faced major disadvantages compared to the others. He had to maintain the illusion he wasn’t homeless and took risks to prove he was the best person for the job. From working at a multimillion-dollar company during the day, he had to sprint to secure a spot at the homeless shelter so he and his son would have a place to sleep that night.

Out of necessity, Gardner used his cleverness to remain competitive. Just being a single dad or working a rigorous internship on their own is tough, combining the two only makes things harder. But he also had additional motivation. As he says in the film, “They [his coworkers] would stay until seven but I had Christopher so I had to do in six hours what they would do in nine.”

According to the U.S. Census Bureau, there were two million single fathers in 2016. This covers a wide range of socioeconomic backgrounds and education levels. Gardner’s story is certainly extraordinary, that’s why Hollywood made it into a movie with a huge star. Still, all of these fathers have one thing in common, they’re raising their children on their own. The Pursuit of Happyness stands as a testament to the level of dedication to their children that all fathers should strive for, regardless of their situation.

After a grueling six-months of hustling every moment of every day, all Gardner’s hard work paid off. On the last day of his internship, his boss called him into the office and offered him the job.

From these humble beginnings, Gardner went on to great success. He started his own lucrative brokerage firm, became a philanthropist, and even published his memoir, The Pursuit of Happyness, on which the film is based.

With all of Gardner’s hard work and dedication, his main goal was to set a good example for his son. He hoped to teach him to never give up on his dreams, saying, “You got a dream, you got to protect it. People can’t do something themselves, they want to tell you, you can’t do it. If you want something, go get it. Period.”