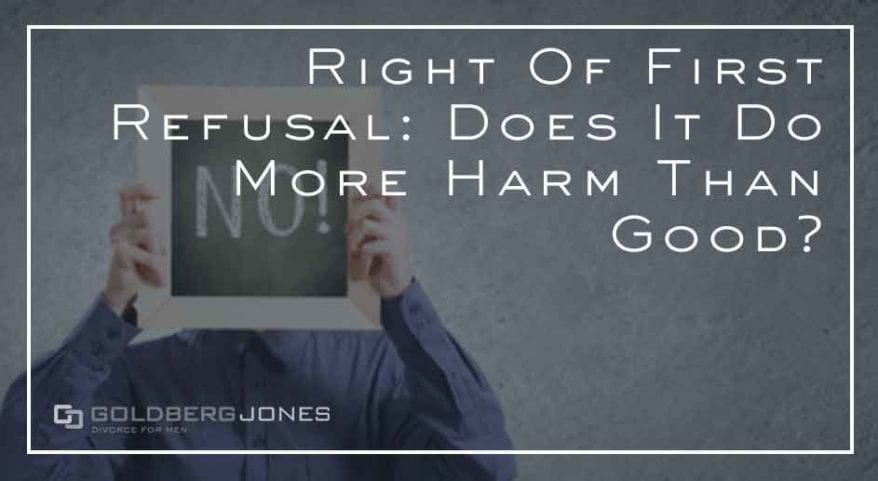 The right of first refusal can be an important piece of a child custody order. After divorce or battles over guardianship, non-custodial parents can use this measure to spend as much time with their kids as possible.

One question, however, often comes up: Does this do more harm than good?

What Is The Right Of First Refusal In Child Custody?

If there’s a right of first refusal clause in a child custody order, this essentially means if your ex is not going to be with your child, you have the first shot at being there. Before they call a babysitter, daycare, or other childcare option, they must offer it to you.

This provision allows the non-custodial parent to capitalize on opportunities to spend more time with the kids. It often makes up for limited visitation and manifests in a variety of ways.

The way it works is: If you have a right of first refusal clause in your child custody agreement, if you’re the non-custodial parent, you get the first chance to care for your child when the custodial parent can’t.

You have the right of first refusal to look after your children while your ex works instead of sending them to daycare. If your ex has a date, you have the opportunity to look after the kids instead of using a babysitter. When it comes to the custodial parent planning a solo vacation, the non-custodial parent has the right of first refusal in deciding who the kids stay with.

This comes into play in other circumstances. However, this is the general overview of how these provisions work on a practical level.

Related Reading: Enforcement Proceedings: What To Do If Your Ex Violates A Parenting Plan

This all sounds great, and it can be positive for everyone involved. But does the right of first refusal ultimately benefit you, your ex, and, most importantly, your children? The answer is not always as simple as it appears.

Right of first refusal is a broad term, one that describes a particular type of child custody order. To be effective, it needs precise, detailed language that lays out the intentions, scope, and limitations of the agreement.

Basically, you need to establish how it will function ahead of time, and you have a great deal to consider.

How often will these situations arise?

Will this be a regular occurrence or a once-in-a-blue-moon type of scenario? You need to make a plan based on your own circumstances.

Does work-related childcare figure into the agreement?

One party may want to include this for ease and consistency, while the other may seek to leave it out to maximize parental time.

Is there a minimum time requirement?

Does the right of first refusal cover quick trips to the grocery store or does there have to be an absence of several hours or an overnight stay?

What about extended family members?

Can your ex leave the kids with their grandparents or an aunt, or do you always get the first shot?

Related Reading: Finding the Best Child Custody Lawyer: What Qualities To Look For

When Do Problems Arise With A Right of First Refusal?

Part of the discussion when developing the right of first refusal should include specifics and exceptions for the sake of clarity. While it may be the right fit in some situations, in others, it may make already tense or difficult circumstances even worse.

If you and your ex can get along and be amicable, this may work well. If not, problems often arise.

This scenario takes two sides willing and able to communicate at the very least on a functional level. But if all you do is fight, such levels of contact may give you one more thing to fight about and exacerbate an already tense relationship. Cooperation and flexibility are key.

If one parent comes to rely too heavily on the other, it sometimes also leads to tension.

You may want to spend as much time with your kids as possible, but that isn’t always feasible. The custodial parent may come to rely on this setup, to assume the other will immediately drop everything. No one wants to feel they’re being taken advantage of.

Right of first refusal can be a useful parenting tool for both parties. But haphazard, inconsistent use can increase tension, friction, and bitterness. If the non-custodial parent can’t cover child care, it still falls to the primary guardian to figure something out.

In cases where one parent’s time with the child is restricted to supervised visitation, the right of first refusal may run counter to the minor’s best interest. It may also prove impractical.

Practicality issues also crop up when the parents live a great distance from one another.

Depending on where you live, crisscrossing town, fighting traffic may consume huge amounts of time. For some, this may be workable, but for others, it’s far less pragmatic.

If there is a history of domestic violence between the two parties, the right of first refusal may cause more harm than good. Again, this requires cooperation and communication between parents to work. And if this is the case, the court likely won’t allow this provision anyway.

Related Reading: Can Your Ex Stop the Kids From Playing Sports?

When Is It The Right Choice?

The right of first refusal is a complex, intricate provision in a child custody agreement. It can be a valuable, useful tool in certain situations. But it can also do more harm than good in others.

Before heading down this path, it’s important to consider all the possible angles.

Especially as this is a contractual arrangement and a breach can carry significant penalties. In the end, you have to determine whether or not this is truly beneficial to you and your kids.

Related Reading: What Are a Father’s Rights In Oregon?