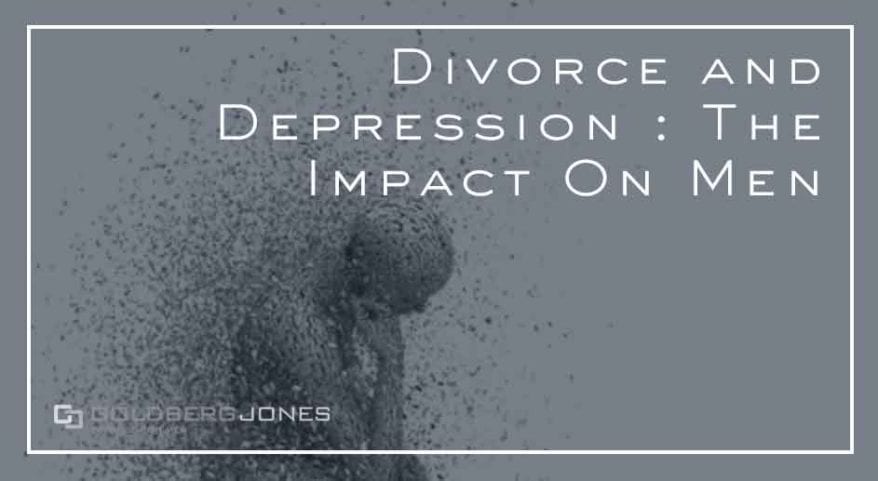 Did you expect a sense of relief once you finally finalized your divorce? Did you anticipate an overwhelming wave of elation and well-being once you signed the divorce papers? Perhaps you did, but that initial relief often fades and depression sets in.

That’s a natural expectation. After all, you’ve been waiting for this moment, building up to this for some time. But what about when that euphoria fades? Or if it never comes at all? You might think you’ll get back to normal, but that doesn’t always happen.

Divorce is often one of the most stressful events you’ll ever experience. It throws your entire life into upheaval in one go. It’s common for men to experience bouts of post-divorce depression.

Everyone faces these risks, both men and women. But one Canadian study found that while that’s true, men face a greater risk of depression after divorce. Researchers examined the data from the National Population Health Survey to look at the role divorce plays in depression.

According to the report:

“Men aged 20 to 64 who had divorced or separated were six times more likely to report an episode of depression than were men who remained married.”

Many factors play a part in this increase in depression. No two situations are identical, so what leads to issues in one case may not in another. And since no two people react the same way to similar hurdles, responses vary a great degree. Still, a number of common recurring themes pop up.

There’s the strain that comes with drastic change and uncertainty. Even if divorce is the right choice and you know that in your heart of hearts, it’s scary and unsettling.

Financial issues often factor into this. You may find yourself having to pay all the bills from a single paycheck for the first time in years. And if you have spousal maintenance or child support payments, that cause an additional burdens.

Many people reported the loss of social support impacted depression. If people pick sides, divorce often ruins friendships and other relationships. You divide assets in divorce, but many couples also essentially wind up dividing friends. It’s common to feel you are alone and don’t have anyone to turn to.

Custody changes also often pop up when people discussed divorce and depression. It’s difficult going from seeing your children every day to a few times a week or a month or even less. You may not be as directly involved in their lives and decision making, which can lead to a lost sense of purpose for a parent.

How much, if at all, these factors impact mental health after divorce varies from person to person. They might destroy one while barely registering for another. Still, they’re common causes men cite as reasons for depression after ending a marriage.

While divorce leads to elevated risks of depression in men following divorce, the research does offer a ray of hope.

Though instances of depression may rise, the study indicates it does get better.

After examining the data, the researchers found that the risk is greatest within the first two years. That makes sense. After all, it’s fresh and new and you’re dealing with many unknowns. But they also found that most people “were no longer depressed four years after the break-up.”

That’s not to say there’s a magic date where things instantly get better for everyone. But as the saying goes, “Time heals all wounds.”

The more space and time you have, the more likely you are to deal with things, put them behind you, and move forward. And isn’t that what divorce is for? To get out of a bad situation and move on to something better?

Take Care of Yourself

If you have post-divorce depression, it’s imperative you seek help. You can turn to family and friends or talk to a mental health professional.

While there’s no substitute for professional help, there are a few things you can do to cope with the symptoms of post-divorce depression:

Finding a hobby or pastime to focus your time and energy on can be a positive way to distract your mind. It gives you something else on which to concentrate. From reading a book to learning to tie fly fishing lures, anything that keeps your mind and your hands engaged helps funnel your energy into something positive.

You know how frustrating it is to not be able to find something when you need it. Reduce your stress by organizing. Taking the time to sort through your belongings helps bring some order to your life.

This is especially helpful if things seem chaotic post divorce. It’s nice to be able to have control over something in your life when you may feel you don’t in certain areas.

Set aside time each day to declutter your living space—but remember you don’t have to do it all at once. Small steps are often more effective than one massive organization effort. Trying to take on too much can have the opposite effect and increase your stress.

A football team can’t win if the quarterback is the only one on the field. Just like the quarterback, you need the help of loyal and dependable teammates. Having friends and family on your team is essential—and don’t forget to enlist the help of a few expert coaches.

People like counselors and therapists can provide the guidance you need to get you back to your A-game. Another area to find like-minded people is support groups. Think of support groups like spring training or training camp. An opportunity to work with people in similar situations can help you improve your skills and remind you you’re not alone.

Depression can be a challenging topic. Many men have difficulty discussing or even acknowledging it. Depression also increases your risk of other health issues.

In the wake of divorce, it’s important to take care of both your physical and mental health. But you don’t have to struggle alone. Recruit supportive people for your team, find an outlet for your energy, and start on the road to a healthier, happier life.

Other Reading: Breaking Down Divorce Rates By Generation