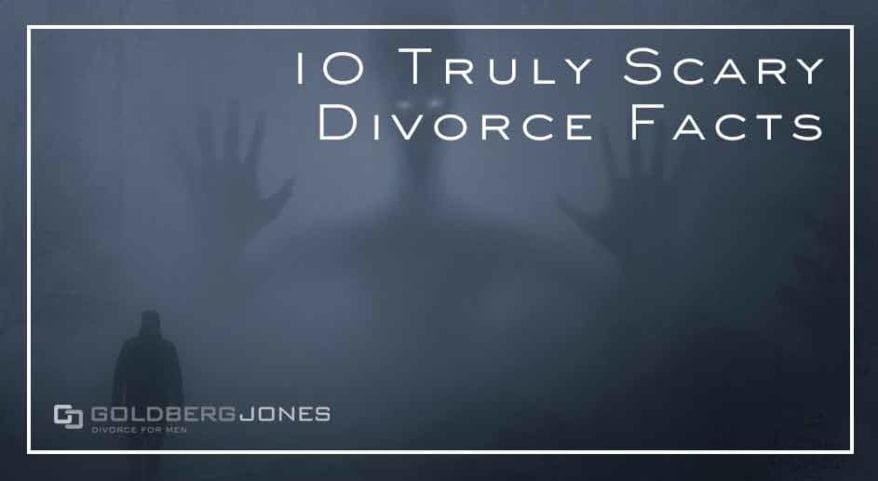 Divorce is usually a time of great upheaval. It may absolutely be the right decision, but that doesn’t mean it’s easy. In a relatively short span, your entire life changes, and it can be a frightening, uncertain experience. And not to add fuel to the fire, but here are some scary divorce facts to be aware of.

Some are interesting, others may be useful to avoid. Hopefully knowing ahead of time will allow you to dodge common potential hazards.

As people push back the age at which they marry, instances of couples cohabitating have risen steadily over the years. Many look at this as a kind of marital practice run, a test to make sure two people are truly compatible.

While that sounds great on paper, in reality, couples who live together before tying the knot are in fact more susceptible to divorce in the long run.

2) The Average Marriage Is Shorter Than You Think

“’Til death do us part” is a common component of traditional wedding vows. In reality, however, that’s a bit of a lofty goal. When it comes to marriages that end in divorce, the average length hovers around the eight-year mark.

It makes some amount of sense. This is long enough to do things like having kids, buy a house, and for the initial honeymoon phase to come and go. It’s also enough time to try to make things work and realize you can’t fix some problems.

As people live longer, healthier lives, the number of people who marry multiple times has also increased over time. Though some people put off getting married until later, the average age of a first divorce is still only 30-years-old.

People grow and change a great deal in their 20s. By the look of things, once they reach 30, couples often realize they each want very different things and it’s time to go their separate ways. Or they’ve simply evolved in different directions.

Related Reading: What are Grounds for Divorce in Oregon

This one is, admittedly, not a particularly scary divorce fact. If your parents were happily married, statistically speaking, your likelihood of divorce drops. Watching a successful marriage not only shows you firsthand that it’s possible, but it also provides ways to make things work.

No one ever said being married was going to be easy, but it’s nice to have examples of how to push forward and deal with conflict in constructive ways. Think of your childhood as an education on how to be married.

A bad marriage is detrimental to mental health, but divorce also comes with an array of physical health concerns. After divorce, men have an elevated risk of hypertension, heart disease, and even cancer, among other issues.

And here’s a truly scary divorce fact: according to some studies, men are eight times more likely to commit suicide following a divorce. It’s a tough time, but it’s important to take care of yourself and get help when you need it.

6) Parents Aren’t The Only Ones At Risk

Parents aren’t the only ones at risk for health issues when it comes to divorce. Children are susceptible to depression and other mental health issues, which often manifest physically.

One recent study found that children living with both of their biological parents tend to be much healthier, physically, than those hailing from broken homes.

That is a scary divorce fact, as well as a reminder that children are often the most vulnerable parties in a divorce. As chaotic as it can be for adults, it’s also important to take the time to look after the kids.

Related Reading: Custody and the Best Interests of the Child

7) Women File For Most Divorces

Again, not a particularly scary divorce fact, but an interesting tidbit nonetheless given our audience is mostly men. Women file for roughly two-thirds of all divorces in the United States. Though it’s varied some over the years, the number hovers around 70 percent.

The reasons for this are hotly debated. Some argue it is for custody reasons, while others cite economic factors. Still others exert that is for convenience’s sake or due to changing gender norms and social conventions.

By now we all know about the health risks associated with cigarettes and smoking. But what you may not know is that it can also be detrimental to your marriage and relationships.

According to one study, if one spouse smokes and the other doesn’t, the couple is ultimately 75 to 91 percent likelier to divorce. Consider quitting, it won’t only benefit your health, it may just save your marriage.

Many people dream of their wedding day for years. After all, it’s a key milestone in many of our lives. But while you envision the big day, maybe dial back the size and scope some. Research shows that couples who have huge, elaborate weddings are at greater risk for divorce.

Fairytale weddings don’t come cheap. After the glow of the honeymoon wears off, the reality of paying back massive sums of money often causes friction and strife in new unions.

10) You May Want To Move Closer To Work

There are no two ways about it, long commutes suck. No one likes sitting in traffic, waiting for your lane to move, trying to find a good song on the radio. As it turns out, it can also have a detrimental impact on your marriage.

A recent Swedish study found that people with commutes longer than 45 minutes are at a much higher risk of divorce. A scary divorce fact is that it’s hard to work on your relationship stuck in your car, a bus, or on a subway for half of the day.

Most of these scary divorce facts are nothing more than statistical notations. Just because you fit into one category or another, doesn’t automatically mean that’s how your situation will play out.

For example, lots of couples with big weddings don’t divorce. And not everyone lets their health slide after ending a marriage.

Still, these are realities in many cases. Being aware of potential problems ahead of time may help you know what to look for and what to avoid. Just because they’re scary divorce facts doesn’t mean they can’t provide useful information. If you know a pattern exists, it’s easier to avoid.