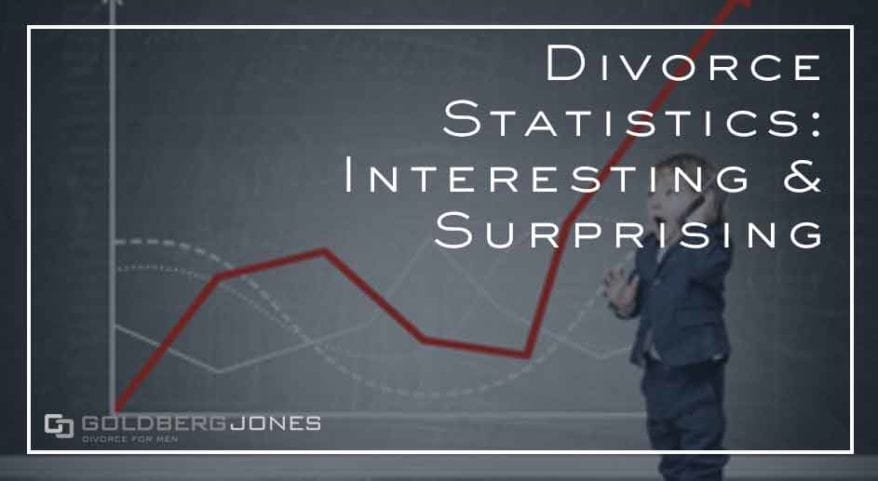 Looking at divorce statistics often gets overwhelming. It’s harrowing to hear that oft-repeated statement that 50% of marriages end in divorce. (FYI: The 50% figure is not accurate and has never reached that level.)

Sometimes it’s tough to interpret the raw numbers and determine what they really mean. With that in mind, let’s take a look at some interesting, useful, or just downright surprising divorce statistics and see if we can provide any context.

Average length of marriage before divorce?

It seems logical to think that after one divorce, people are less likely to divorce again. You learn some things through your experience and emerge wiser, with a better sense of what you want and need.

That certainly happens in some cases. People become more cautious and make sure a relationship is sturdy and stable before taking that next step. But that’s not how it happens in every case. Looking at the divorce statistics illustrates this point.

In reality, with each subsequent marriage, the chances of divorce greatly increase. The numbers break down like this:

After all of this, if you still marry a fourth time, you may just be a glutton for punishment.

How Common Are Second Marriages?

Divorce is so commonplace that most people barely bat an eye when finding out someone was married. Many of us have friends, family members, or are ourselves divorced.

In 2004, a U.S. Census Bureau survey found that in 36% of weddings at least one spouse was remarrying. That means, in more than one-third of marriages, one party had previously been married.

This doesn’t mean, however, that every marriage ends in divorce or that everyone marries multiple times.

Additional data from the U.S. Census Bureau indicates that roughly half of the adult population marries only once. 50% of men and 54% of women tie the knot one time and one time only.

This includes people who marry and divorce but don’t marry again, as well as those who remain married for the long haul.

Related Reading: Has The Divorce Rate Ever Been 50%? Nope.

The overall marriage rate has declined steadily over the last few decades. Young people between the age of 20-34 opting not to marry, or pushing it off until later in life, is a big contributing factor.

Since 2000, the percent of this age group who haven’t married has spiked in every state. According to one 2016 report, 81% of this demographic in Washington DC remains unmarried.

This number may be exaggerated in city centers where young people relocate to work, but it reflects a broader trend. In many states, the number currently hovers around 70%, were at the turn of the 21st century the highest was 57%.

What Do These Divorce Statistics Mean?

What these divorce statistics don’t offer is a look at individual situations and circumstances. It’s easy to glance at these figures out of context and think everything is doomed. But these numbers are just that, numbers.

Divorce statistics that lean one way or another doesn’t mean that’s how every marriage plays out. Sometimes second and even third marriages stick and are wonderful. The people involved and the work they put in determine the success of a marriage.
Related Reading: Breaking Down Rates Divorce By Generation