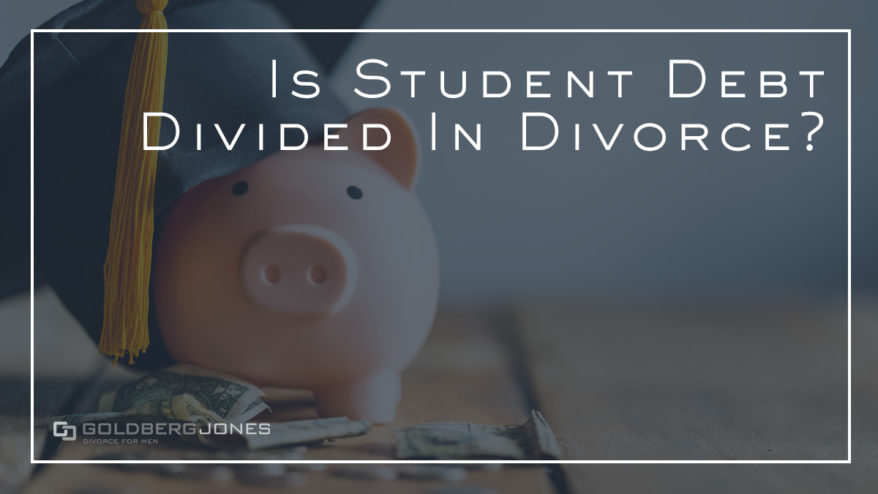 Money problems ruin at least as many marriages as infidelity, probably more. Financial strain is a huge source of stress for many people, both individuals, and couples. One major area where we feel the pinch is student loan debt.

One recent study uncovers the major impact this has on marriage and divorce.

The tally of outstanding student loan debt in the U.S. tops $1.7 trillion—that’s trillion with a “T”—an all-time high. On average, the amount owed is $34,144, up more than 60% over the course of the last ten years. Over the same span, the number of people who owe north of $50,000 tripled.

Is Student Debt Divided In Divorce?

With such astronomical sums in play, it makes sense this causes people a great deal of concern.

Outside of buying a home, this likely represents one of your biggest debts. Monthly payments top hundreds if not thousands of dollars. And that’s often just to stay afloat, not even paying down the principal.

According to one recent report, “one-third of borrowers said college loans and other money woes contributed to their divorce.”

The study, which surveyed more than 800 adults, found that one in eight divorces, or 12.5%, place the blame primarily on student loan debt.

How Does The Court Treat Student Loans?

Not only does student loan debt often place additional strain on a marriage, but it can also play a part in divorce. Depending on the state you live in, and when the loans were taken out, they may also factor into the divorce settlement.

When it comes to the division of property, Oregon is an equitable distribution state. This means the courts divide all assets, as well as all debts, in a fashion they deem fair. You must determine if a particular item is marital or separate property. This influences how you split things up.

The definitions are fairly simple on paper. Marital property is generally anything acquired during a marriage. On the other hand, separate property consists of things obtained outside the marriage. This also includes gifts, inheritances, and other items.

For the most part, student loan debt acquired before marriage remains separate property.

It doesn’t necessarily become a shared obligation when you tie the knot. Each spouse takes responsibility for their own loans and things can be relatively simple. You can even draft a prenuptial agreement saying as much.

Situations like making payments from commingled funds can change things a bit. If one spouse has substantially more debt, that can also influence the divorce settlement as the courts attempt to reach a reasonable balance.

Student loan debt in a divorce becomes a bit more problematic when acquired during the marriage.

Things also vary depending on the types of loans. With federal loans, for example, the name on the paperwork matters most. If they’re yours, they generally stick with you.

Private loans usually require a co-signer, which, in the case of married couples, is most often a spouse. This can put both parties on the hook for the money owed.

Other Factors Taken Into Consideration

Another thing to consider is who makes the payments. When one spouse goes to school full-time, it’s common that the other takes the breadwinner role.
If you support your partner and make payments on their student loans, the court may compensate you in the divorce settlement. This doesn’t just include straight monetary support either.

Driving them to school, delaying your own work or educational advancement, or even pitching in more around the house or with raising children all often factor into the agreement.

Generally, student loans stay with the student. But in cases where one spouse helps advance the other’s earning potential, that often factors into spousal support awards.

Related Reading: Whether or Not to Sell Your Home During Divorce: 5 Questions to Answer

As you’ve read, though things get fuzzy, in most cases, student loans stick with the borrower. Even if acquired after you marry.

There is a notable exception. However, it’s pretty niche and most people won’t have to worry, though it’s worth mentioning.

There was a short-lived Department of Education program that allowed married couples to consolidate their separate student loans.

With low-interest rates and only a single payment every month, there was a definite upside. Enough that it attracted 14,000 participants.

Since we’re talking about divorce and student loans, you probably see how problems might arise.

In cases of divorce or domestic violence situations, the program didn’t include any method for separating the debts. This led to situations where one party stops making payments, leaving the other on the hook for the total of both loans.

The program shuttered in 2006, so no new couples bear this burden. Though some do still feel the effect.

It’s taken a while, though there is legislation in the works to fix the situation. This would allow the communal loan to be divided based on the initial amounts borrowed. While it’s been in the works for a few years, the bill still needs to pass congress.

If you fall into this category, you’re likely more than aware, very aware. It’s not the type of thing you tend to forget.

And while it’s a small number of people in the big picture, this scenario is worth knowing about.

If nothing else, it serves as an illustration of how, while these things often appear simple on the surface, it’s easy for them to get complicated in a hurry and why you should take great care when it comes to your finances.

As is so often the case, it’s likely in your best interest to seek out professional guidance in the form of a financial advisor or an experienced divorce lawyer. It may help you in the long run.