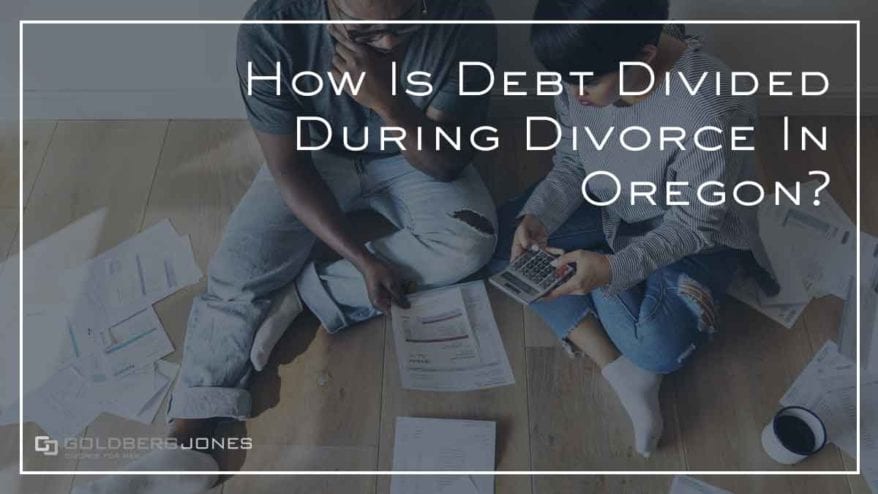 In the state of Oregon, in terms of dividing debt in divorce, the general idea is for both spouses to emerge on a relatively equal footing and able to enjoy a standard of living similar to what they had during the marriage.

When it comes to the division of debt, Oregon uses the equitable distribution model.

Equitable distribution is “A legal principle under which assets and earnings acquired during marriage are divided equitably (fairly) at divorce.”

No matter the name on the title, credit card, mortgage, auto financing, or business loan, Oregon presumes both spouses contributed to the acquisition. It’s then subject to division in an equitable fashion. If you build up substantial liabilities during a marriage, the court views them as shared marital obligations.

No. It’s important to note equitable distribution does not mean you divide everything equally. Assets and debts may be divided disproportionately depending on the unique factors of your case.

Ultimately, the debt division decision accounts for need, earning potential, and other factors. Exceptions to this include things like gifts or inheritances.

Types of debt acquired during marriage include credit card balances, mortgages, auto financing, business loans, and things of that nature then get distributed between spouses.

No matter the name on the title, Oregon presumes both spouses contribute to the acquisition. Dividing debt in divorce is then subject to division in an equitable fashion.

If your ex obtains a credit card behind your back, runs up an astronomical bill, it will still likely be a joint obligation. Generally speaking, if it’s amassed during your marriage, it’s most likely yours to deal with as well.

While you will likely find yourself on the hook for the debt your ex built up during the marriage, there’s good news when it comes to the pre-existing variety. Timing, however, is the key in this situation.

If your ex rang up thousands of dollars worth of student loans before you tied the knot, that’s not your problem. The same goes for those massive credit card bills that still pop up.

Debt Accrued During A Legal Separation

For debt following a separation, but before a divorce is finalized, the waters muddy a bit. If the court looks at necessities like electric bills and utilities, they may split them up.

But if your ex goes on a lavish ski vacation, that’s a different story altogether.

If you buy a house or condo, finance a boat, or secure a car loan, you expect to deal with these debts. But what about unexpected surprises?

What if your spouse acquired debt without your knowledge? How is that debt divided in divorce? From a legal point of view, the court doesn’t care whose name appears on the paperwork.

If your ex obtains a credit card behind your back, runs up an astronomical bill, it will still likely be a joint obligation. Generally speaking, if it’s amassed during your marriage, it’s most likely yours to deal with as well.

As with most areas in divorce, dealing with debt gets twisted in a hurry. In the case of shorter marriages, things may be straightforward, but the longer a union, the more intertwined lives become, and the more complex matters get.

Do creditors have to abide by the divorce decree? No.

Dividing debt in divorce also comes with an unexpected hazard. If your ex fails to pay off any obligations the court assigns, it may come back on you.

If your name remains on a home loan, credit card bill, car loan, or other similar contracts, you remain liable for those debts; even if the divorce agreement gives them to your ex.

Family courts have no jurisdiction to alter agreements with creditors. The divorce settlement can delegate debt and decree that your ex must pay back a balance. But that doesn’t take your name off the paperwork.

Part of the divorce decree can include stipulations like your ex has to refinance a home loan within a certain amount of time to remove your name. Still, that doesn’t always happen.

It’s important to stay on top of things like that to make sure they happen. This can impact your credit, among other things. If creditors come after you, you may wind up having to pay off the debt then sue your ex for restitution.