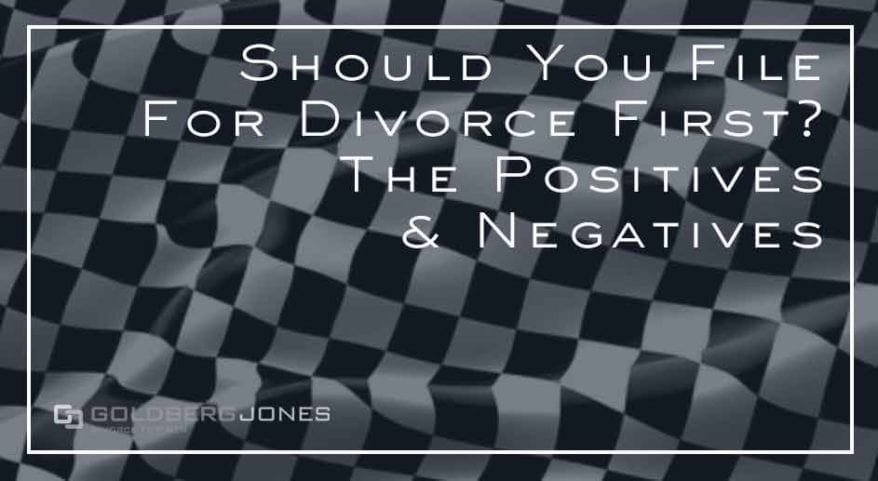 People often look for any advantage they can find when it comes to divorce. For a process known to be contentious and full of conflict, this makes sense. In some cases, ending a marriage resembles open warfare. Many maneuvers and strategies can do provide an edge.

Does Who Files First Win?

Many people believe that if you file for divorce first, it gives you an advantage;  but no two divorces are ever identical.

It can in some instances, but not always. In fact, in certain cases, it can damage your cause. Each has its own set of circumstances and variables to take into account. So what works in one may prove disastrous in another.

Being the one to file for divorce first definitely gets the ball rolling. But that doesn’t always mean it puts you in the lead, so to speak. It’s important to look at your case and make sure it’s the right decision. As with many legal matters, there are potential benefits and detriments to consider.

When you file for divorce first, the biggest advantage it gives you is the opportunity to prepare. By the time you reach this stage, your marriage has probably seen better days. Still, if your spouse files for divorce first, it can come as quite a shock.

Being the petitioner doesn’t change any of the formality, BUT, at the beginning of every process, there is a need to address some issues at least on a temporary basis. Things like:

If you kick things off, surprise won’t be a factor. You’ve defined the issues to be addressed. You served the other party, the other party gets to do a response.  Tit for tat, then you get to do a reply.  So you get first word and last word.

You won’t have to scramble to get everything in order and meet deadlines. Ending a marriage comes with a wide array of things to deal with. You have to collect or prepare:

In many cases, you’ll want to hire a divorce attorney, which is a process unto itself. You may want to save money to cover the fees or enlist a financial expert to advise you.

All of this requires organization. If you file for divorce first, you have the opportunity to arrange everything beforehand.

Depending on the circumstances, you may even prevent your spouse from hiding assets, emptying accounts, or other shady business. Hopefully, that’s not the case, but it does happen.

In general, this move gives you a chance to prepare. But even if you’re getting ready and your spouse files first, the work you’ve already done remains useful. You would have had to do the same things eventually, so the work isn’t a waste.

Laws vary a great deal from one state to the next, sometimes even county-to-county. For example, when it comes to the division of property, our neighbors to the North and South, Washington and California, adhere to the community property model.

In Oregon, however, we practice equitable distribution. This has a significant impact on how courts divide assets and debt in divorce.

Jurisdiction also influences child custody, spousal support, and more, and often plays a large role. When you file for divorce first, you have more influence on where jurisdiction falls. If you and your spouse live in the same place, it may have a minor effect. On the other hand, if you live in different cities or states, jurisdiction can have a major impact.

With the Uniform Child Custody and Jurisdiction Act and similar legislation, courts take a child’s best interests to heart.

Their well being takes precedence, so in those cases, when you file for divorce first, it may not carry as much weight. Courts take a variety of other factors into account when determining jurisdiction in custody cases.

When you file for divorce first, you usually have the chance to present your case first. While that sounds like an ideal situation, there are, again, positives and negatives to consider.

Presenting your case first gives you the chance to make a convincing first impression. Especially if you have a strong case and compelling evidence on your side.

If you don’t, however, you risk leaving a lingering negative impression. That may color the rest of your case. Judges are, after all, human. You also show your hand first. This isn’t a TV courtroom with a jury, surprise witnesses, and gotcha moments.

But by presenting first, you reveal your strategy. Your spouse and opposing counsel then have time to tailor a response.

Ideally, you and your divorce lawyer have laid the groundwork for a strong case based on sound legal strategy. If that’s true, when you present shouldn’t be an issue. A sturdy case is sturdy regardless of whether you’re first or second out of the gate.

Should I File For Divorce First?

At the end of the day, this is the big question: should you file for divorce first? As already stated, every case plays out differently, so there’s no one-size-fits-all answer. It varies from case-to-case. Depending on the surrounding circumstances, it can benefit you, create a negative influence, or have little impact at all.

Taking an (appropriately) aggressive, proactive approach can benefit your case.

If you’ve prepared and established a sound strategy, either on your own or with an attorney, by all means, file for divorce first.

But if you don’t have a plan in place, don’t rush things.

Don’t file for divorce first just to be first or do it out of spite. You may want to get things started just so they’ll be over sooner, but that can backfire.

If you’re not ready, it can cost time, money, and results.

Take the steps to build a strong, organized case. Gather all of your paperwork and collect important documents. Figure out if you need a divorce lawyer or not. Being prepared will only benefit you.

From a legal perspective, whether you or your spouse file for divorce first doesn’t really matter. That said, it can play a part and influence the proceedings. However, as long as you build a solid case and take the time to prepare, you have a chance at an optimal outcome regardless of who initiates the process.