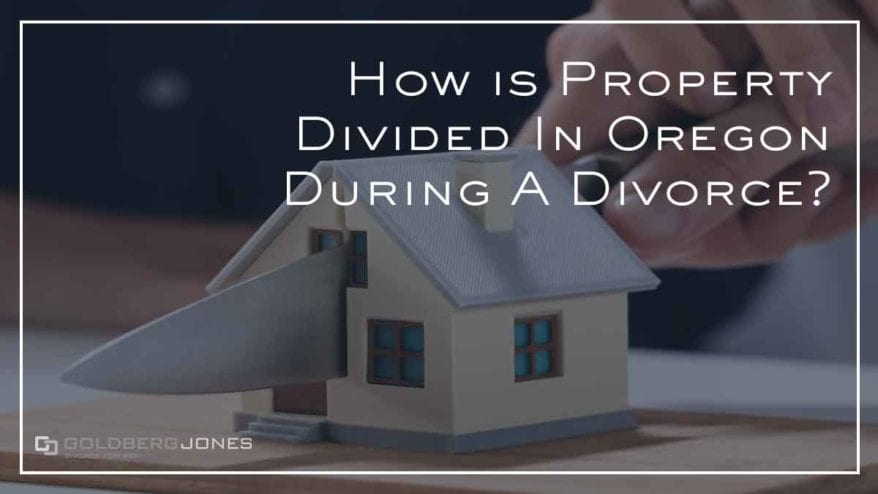 Laws and regulations differ from state to state, so where you live can have a huge impact on your divorce and property division.

Though the regions to the north and south of us both take the community property approach, they’re actually in the minority. Only nine of the fifty states—and Alaska by agreement—adhere to community property statutes. The rest practice equitable distribution and Oregon falls into this category.

In community property states, all assets, property, and debts acquired during a marriage as belonging equally to both spouses. Equitable distribution views them as belonging to the individual spouse who earned it.

When it comes to divorce, no set rules for the division of property exist, but the court divides the assets between both parties in a fair and equitable manner.

The two sides sit down, usually with attorneys, judges, or mediators, to determine the ideal way to split assets. The goal is for both to maintain a standard of living similar to what they enjoyed during the marriage.

Before getting down to the business of dividing your assets, it’s important to know that there are two kinds of property: separate property and joint property. Oregon treats both of these types of assets differently.

As the name implies, the separate property belongs to one spouse or the other. Though it’s usually something owned before marriage, this category also includes gifts or inheritance received during the marriage. The court can include separate property if fairness dictates, but in general, it remains with the owner.

In the case of premarital property, it usually stays with the original owner. For example, if you bought a car and kept it registered in your name, it will likely remain yours. This gets cloudy in longer-term marriages or in cases where assets are commingled.  In longer marriages, things become much more intertwined and the line between separate and marital property tends to blur.

All property acquired or earned during a marriage generally constitutes marital property. Despite a name on a title, Oregon courts presume both spouses contributed to any assets acquired during the marriage, whether true or not. Property equally acquired is subsequently equally distributed in divorce, in a fair, equitable fashion.

It is possible for spouses to work out how to divide property on their own. If both sides come to an agreement, the court will generally accept it, unless it skews drastically in favor of one party. Even once the courts get involved, you can make a case for ownership.

You can argue that the other spouse didn’t contribute as much to a certain acquisition. Or the two sides can bargain and haggle. For instance, perhaps you’re willing to cede possession of a car in exchange for the title to a boat.

Factors That Influence How Assets Are Split

The reality of property division varies a great deal from case to case. Things often become tricky when it comes to determining what belongs to who. Equitable distribution doesn’t mean the court divides all assets in half.

The court attempts to divide the assets in an equitable fashion. In order to accomplish this, they must get a clear picture of who owns what individually and what belongs to the couple as a unit.

The court looks at:

In many cases, the court subsequently distributes these items or assets in a fitting manner. During the process of property division, however, you can dispute this approach. You can argue the other did not contribute equally to the acquisition, make a case for possession, or barter for ownership.

Once the assets and debts have been classified as either marital or separate property, a value or liability is assigned to each. The court then divvies them up between the two parties in the fairest, most equitable way.

Anticipated costs also figure into the division of property. If you have children, the court accounts for their ongoing needs. This includes the ability to pay child support and provide for their care and well-being. For example, the custodial parent may get the marital home for stability and continuity’s sake.

Division of property varies wildly from case to case. How the court splits shared assets depends on a wide array of influencing factors. While a number of considerations assist in the division of property, one that doesn’t is fault.

Oregon is a no-fault divorce state, so who caused a split doesn’t play a role in how assets are split. And individual judges have their own interpretations and applications of the laws and regulations.

Major assets can complicate the property division process. But there are a number of ways to go about this. Houses offer a prime example. For most people, a house represents the most valuable thing they own. Because of this, they’re usually the biggest piece of the puzzle.

In these situations, you have three common strategies.

Related Reading: Should You Sell Your Home During Divorce?

How Does The Court Designate Between Separate And Joint Property?

In an equitable distribution state like Oregon, in a broad sense, what you owned before the marriage will likely remain yours. On the flip side, what was acquired during the union will likely be up for division.

The court attempts to divide the assets in an equitable fashion. In order to accomplish this, they must get a clear picture of who owns what individually and what belongs to the couple as a unit.
In many cases, the court subsequently distributes these items or assets in a fitting manner.

During the process of property division, however, you can dispute this approach. You can argue the other did not contribute equally to the acquisition, make a case for possession, or barter for ownership.

Once the assets and debts have been classified as either marital or separate property, a value or liability is assigned to each. The court then divvies them up between the two parties in the fairest, most equitable way.

Everyone thinks of bank accounts, vacation homes, stocks, bonds, retirement annuities, and other traditional assets. But there are a number of unexpected divorce assets that often go overlooked.
Too often people leave potentially valuable items on the table because they simply don’t think about them or their worth.

With that in mind, here is a collection of unexpected divorce assets that often go overlooked when ending a marriage:

Many of us have credit cards where we earn airline miles or similar rewards every time we swipe. They’re convenient and come in handy for trips and vacations. And if you acquire them during a marriage, the court considers them marital property and subject to allocation.

The actual division can be difficult. Some airlines assign a dollar value to miles, others don’t. This complicates things when it comes to establishing their value. Whether or not your particular program allows an account to be divided also plays a role. This is one unexpected divorce asset many people fail to consider.

People collect everything. If it exists, there’s probably an enthusiastic collector out there.

These collections often have great sentimental importance. Beyond that, depending on what it is, they may also have a substantial monetary value. Depending on when you acquired them, these items factor into your divorce settlement.
Related Reading: How Is Pet Custody Decided In Oregon?

It may sound morbid to consider the value of cemetery plots in a divorce, but have you priced them lately? They don’t come cheap. Since you likely don’t want to be buried next to your ex, unless we’re talking about a remarkably amicable split, this is one to put on the chopping block.

Plots carry a substantial price tag. They can be an unexpected divorce asset you shouldn’t overlook when it comes to the division of property.

It may be a bit tricky to put a price tag on, but intellectual property can also factor into a divorce settlement. This includes everything from copyrights and patents to trademarks and more. They may not always be huge revenue makers, but they could in the future, or you may simply want to hang onto an idea you had.

Timing plays a role in how the court divides these. For example, if you receive a patent early on in a marriage, but you did all of the legwork before the wedding, it may count as separate property. But if you derive a significant amount of money from it during the marriage, that may also be subject to division.

Loans to Other People

Loaning money to friends and family can be a dicey proposition. Many of you have “loaned” someone money when you know you have no hope of getting it back. At least not any time soon.

That said, money loaned during a marriage may come into play while you hash out a divorce settlement. For instance, if your ex loaned her brother $5000 from joint funds while married, the money paid back can often be divided.

Related Reading: The Impact of Major Purchases on Divorce

You may not think of a country club membership as a shared asset, but it just might be. You may not even golf. But clubs, associations, and memberships like this often charge large sums, hundreds of dollars a month in some cases, to join and maintain that connection. These can come into play during a divorce.

Some clubs have specific guidelines for divorcing members, though many will honor the couple’s ultimate decision. In some cases, you may have to re-apply for membership. Like other assets, you and your spouse will have to negotiate the terms and decide on how to divide the value.

This is far from an exhaustive list of unexpected divorce assets. We could go on and on. More than anything, let this serve as an illustration of why you should pay attention to the details during a divorce. You may miss out on substantial items or vital bargaining chips because their worth simply isn’t as immediately obvious as others.