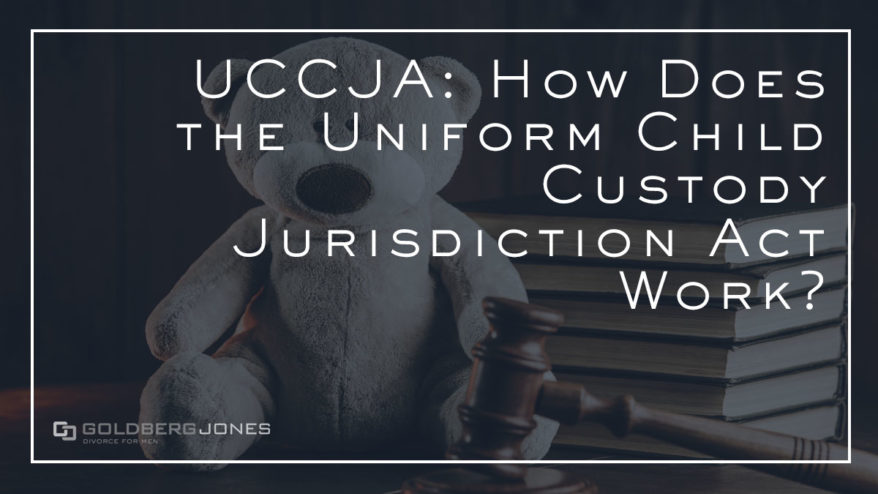 During a divorce, things get bitter, nasty, and downright mean. There may be hurt feelings, lingering resentments, and all kinds of acrimony. Too often, kids get caught in the middle.

When there are minor children and custody battles involved, the situation can become even more heated and intense. This is where the Uniform Child Custody Jurisdiction Act (UCCJA) and its legal descendants come into play.

What is the UCCJA, or the ‘Uniform Child Custody Jurisdiction Act’?

All too often in situations where there are taut, strained fights over guardianship, one spouse or the other resorts to kidnapping. While not a common occurrence, it may be a looming threat. In order to curb this, the Uniform Law Commissioners created the Uniform Child Custody Jurisdiction Act was passed.

The UCCJA was established in 1968 and by 1981 every state had adopted the measure. Before taking effect, non-custodial parents frequently transported children across state lines.

They hoped to find a sympathetic court to overturn what was, in their mind, an unfair custody ruling. Enough of these cases succeeded that this type of behavior continued.

In 1981, Congress initiated the Parental Kidnapping Prevention Act with a similar goal in mind. For all intents and purposes, the PKPA was an update to the UCCJA.

In 1997, there was yet another renovation with the familiar-sounding Uniform Child Custody Jurisdiction and Enforcement Act. This was adopted by 49 states, Guam, the U.S. Virgin Islands, and the District of Columbia. Only Massachusetts and Puerto Rico held out.

Related Reading: What Happens When the Court Appoints a Guardian At Litem?

How Is Jurisdiction Determined?

There are definitely intricacies and differences between these three statutes, though the UCCJEA essentially replaces the UCCJA. The update addresses some inconsistencies and contradictions.

That said, the basic intent is the same. It aims to establish concrete jurisdiction in custody litigation and to determine the “home state” of the child in question.

When it comes to determining the home state, the court accounts for many factors. First up, and the most obvious, is the actual home state of the child. Where he or she has resided for at least the previous six months.

In the view of the writers of the act, it’s in the best interest of the minor child in question to handle custody decisions where they actually live.

In the event that the court is unable to definitively name a home state, one where the child and the parties involved have significant connections is the next option. This can include having relatives in a particular place, or having lived there before and still maintaining links, like a doctor or daycare in the area.

If a child’s welfare is threatened, emergency jurisdiction may be declared by a particular state to deal with immediate, pressing issues.

Finally, if there are no other options, if no other home state can be determined, the presence of the child in a particular state may be grounds for jurisdiction. Simply, if there is no other way to establish dominion, being there may be enough.

Related Reading: Jurisdiction: How Where You File Impacts Your Case

Why These Measures Are Necessary

As Americans became more transitory, moves from state to state became increasingly common. There grew a necessity for measures like the UCCJA, PKPA, and UCCJEA. This mobility impacts custody disputes between parents, married or not.

In the case of separations or divorce, it’s not unusual for one spouse to relocate to another state. Perhaps for a new job or maybe you have family in another location. It may simply be in pursuit of a fresh start.

Child custody orders can be modified, and with moving from one state to another, jurisdiction often becomes confused and muddy. For example, if a custody order was handed out in the state where a divorced couple lived, but the custodial parent moves to another, questions arise.

What These Measures Achieve

There were no concrete, definitive answers to these questions prior to these acts. They address that by establishing a clear, concise basis for setting jurisdiction and by discouraging multiple competing custody orders.

The biggest aim is to avoid territorial conflicts and clashes when it comes to child custody cases. This negates any potentially damaging situations for the children.

By fostering cooperation between states, and establishing jurisdiction, these measures strive to prevent parents from abducting their own offspring in the hopes of getting a more favorable custody ruling in another place.

When there is a definitive verdict on which state has jurisdiction in a case, this avoids the potential for multiple rulings, possibly with conflicting results, and prevents extended custody battles in multiple locations. Such drawn-out proceedings can have a harmful influence on the children involved.

These acts also clarify the situation when it comes to enforcement.

What This Means For You

How these acts impact you and your situation vary a great deal from case to case. In a general sense, however, they safeguard and protect the health, interests, and overall well-being of your children. Determining which state has jurisdiction in your case can go a long way towards streamlining the custody process and resolving any ongoing issues.