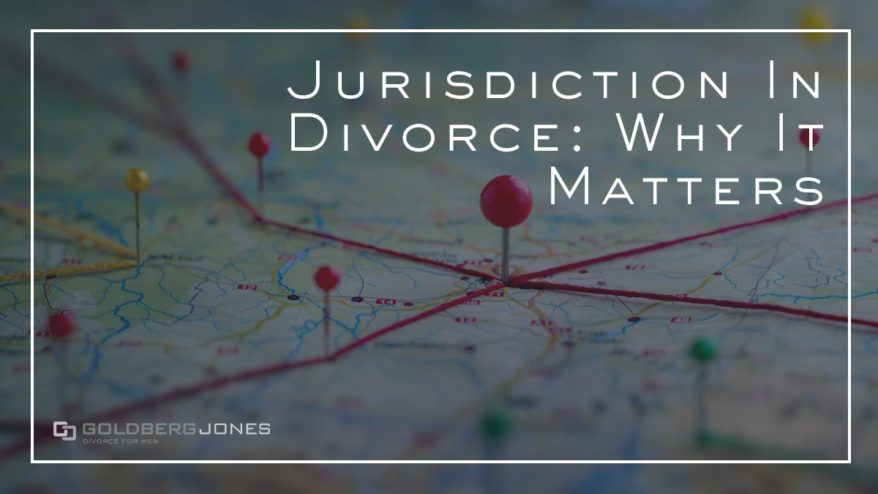 Once you head down the path of divorce, you also have a ton of subsequent important decisions to make. This includes where you file for divorce, as jurisdiction has a huge impact on what follows.

How Does Jurisdiction Affect Divorce?

Laws vary a great deal from one state to the next, and even from county to county.
Where you live has a big influence on how the courts divide property, rule on child custody, and even determine child and spousal support.

Because of this, you want to take steps to file for divorce in the right state, county, and even court.

Do You Have To File In The State You Live In?

Many people mistakenly believe you must file for divorce in the state where you were married. That’s simply not true. People move around the country all the time. If you relocate from state to state often, it can be difficult to pin down where you file for divorce.

Members of the military often face this issue. You must meet the legal residency requirements of the state where you file for divorce. This keeps people from bouncing from one state to another to find more favorable divorce laws.

Every state has specific rules and regulations regarding residency. Most require you to live in-state for a specific amount of time before you can dissolve your marriage there.

For example, you must live continuously in Oregon for six months before you can file for divorce here.

Kansas, on the other hand, only requires 60 days, while New York wants a full year. Some states even have individual counties with their own residency requirements. For example, if you move from one California county to another, you must wait three months before you can file for divorce there.

Oregon doesn’t have this stipulation. If you move from Portland to Eugene, you can file immediately. If you do move to a new state, however, it’s important to know these things vary.

Filing For Divorce When You Live In Different States

Depending on the situation, one state may offer certain advantages to filing there. On the other side of that coin, a particular state having jurisdiction may negatively impact your case. Again, knowing how things differ is key.

It isn’t necessary for both spouses to be legal residents of the same state. If the two parties agree which state has jurisdiction, that’s where you file for divorce if you choose.

In cases where both parties have established residency, the state where the papers are filed usually maintains jurisdiction.

So, why is where you file for divorce so important? Jurisdiction impacts many facets of the process. It can influence your financial state going forward, how much you see your kids, and much more. Here are the ways it can have an impact.

Community property views all assets acquired during a marriage as belonging equally to both. This affects how the court splits up property and assets during a divorce.

Child custody is a big issue in many divorces. Numerous factors play into the court’s decision.
Courts can order joint custody or sole custody, but again, the specifics vary from one state to the next.

In Oregon, the court can only award joint custody if both parents agree. Beyond that, any person with an established emotional relationship with a child, related by blood or not, can petition for custody or visitation.

This is quite different from other states and illustrates how much influence jurisdiction has. The way jurisdiction is determined in cases involving children does differ, but we’ll talk more about that later.

Child support payments cover a child’s basic necessities after divorce. This includes a safe place to live, food, medical care, education, and more.
Courts consider a variety of factors when determining the amount. Need, the earning potential of each parent, parenting time, and other factors play a part.
But states also weigh these elements differently, so the final amount may vary depending on where you file for divorce.

Again, not every state handles things this way, so where you file for divorce often plays a huge role.

As with most areas in divorce, children complicate matters. Jurisdiction is no different. We touched above on how different states rule on child custody. But jurisdiction is another issue.

While spouses can consent to another state having jurisdiction in a divorce, that’s not necessarily the case with custody decisions.

This is where the Uniform Child Custody Jurisdiction and Enforcement Act comes into play. Established in the late 1960s, and adopted by every state by 1981, the UCCJEA is a statute that determines jurisdiction in cases involving children.

It’s a complicated set of rules and regulations that establish a child’s “home state” in these situations.

Designed to serve the well-being and best interests of minor children, the home state is usually where the child lived for the previous six months or one where the child has substantial connections.

These are just a few ways that illustrate the importance of where you file for divorce. Jurisdiction impacts many areas of the process, and it’s vital to know how. State laws often vary in ways you never expect.

Whether you live in Oregon or another state can have a huge impact on your settlement, and your life moving forward, and it’s definitely worth learning the ins and outs.