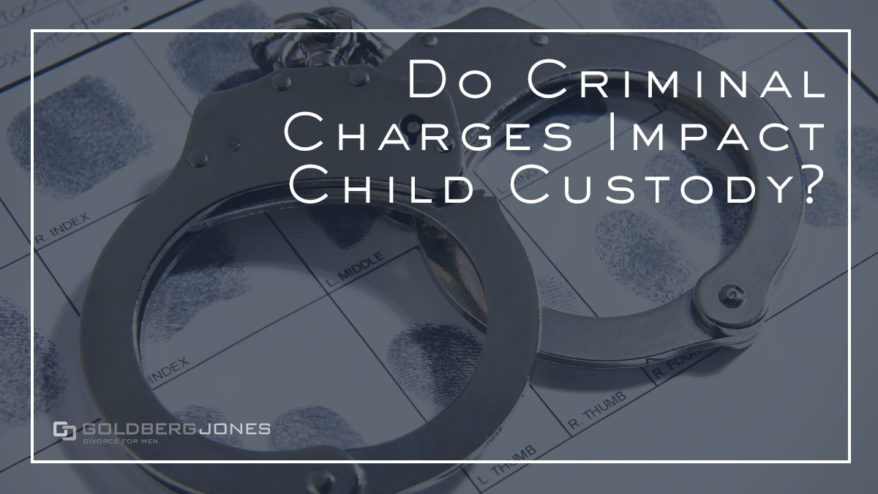 When it comes to disputes over custody, the court places the best interests of the children above all other concerns. That’s the general rule. This includes parental preference and convenience.

Given this stance, it’s easy to imagine how criminal charges might impact child custody battles. If they come into play, they often have a substantial influence on the way cases unfold.

How Pending Criminal Charges Can Work Against You

If the police arrest one parent during a custody case, or if a parent has pending charges, numerous factors determine how much impact it has.

Is the Charge Related to the Case?

If the crime in question directly relates to the custody case, it understandably has a more substantial bearing on the outcome.

But, if the police arrest your ex for an unrelated misdemeanor, something minor like shoplifting, the court may not consider it at all. Or at least it may not carry much weight.

On the other hand, the more serious an offense, the greater the impact criminal charges have on your claim. If there’s the potential for a lengthy jail sentence, that can play a role.

This is especially true when an arrest directly connects to the child custody case.

Does It Impact Parenting Ability?

Though charges may not directly relate to the situation, criminal charges may still impact child custody and affect the outcome.

Since the child’s best interests are the primary concern, it’s possible to show that arrests or illegal actions negatively affect one parent’s ability to adequately care for the child.

Similarly, a drunk driving arrest may appear unrelated to parenting ability on the surface. But the court may view it as indicative of a larger pattern of behavior and poor decision-making. Things like this often cause them to think twice before ruling.

As the safety and well-being of any children are the chief concerns, courts don’t look kindly on actions and choices that place minors in harm’s way.

A history of violent arrests often leads the court to assume things about a parent. This can lead to limited visitation or only supervised time with the kids. More arrests generally make it less likely the court rules in that parent’s favor.

Related Reading: What Is The UCCJA? A Look At How It Protects Children

Not All Criminal Charges Are The Same

The courts don’t treat all criminal charges the same. Depending on the nature of the crime, it may or may not have a major impact on your custody case.

If such charges are levied against one parent, the other parent may file for a temporary custody order.

Should the court determine that one parent is an immediate threat to a child’s safety, it may award emergency custody.

It can take weeks and months in many cases to get into court in most regular cases. If the court finds a child in “Immediate Danger,” it’s possible to receive an emergency custody order to keep them safe in the meantime.

Under Oregon law there are two statutes for emergency custody:

During a custody case, but before the court reaches a judgment, a judge may issue an ex parte temporary custody order. The requesting party must file an affidavit and the court must base it on the facts presented, to determine whether the child is in imminent danger.

After a custody decision, the court may also issue an ex parte emergency custody order. The non-custodial parent files an affidavit stating that the child is in danger and present “clear and convincing” evidence.

Additionally, in situations where the court already awarded custody, the requesting parent needs to make a good faith effort to alert the other parent to the time and reason for the court appearance.

How Much Do Criminal Charges Impact Child Custody?

The real answer to this question is that it depends. It varies from case to case and the court must account for many factors.

That said, criminal charges don’t make your situation any easier. When children are involved, emotions run high and things tend to get heated. Arrests and criminal proceedings only exacerbate these situations.