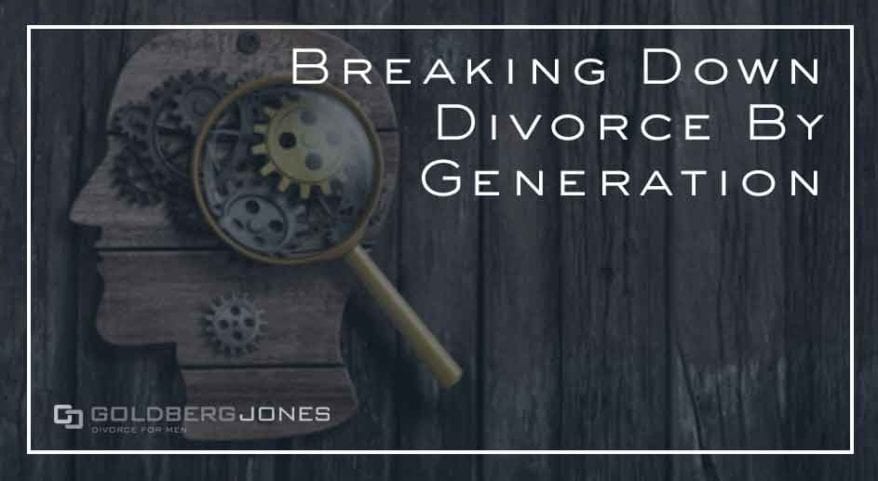 The common refrain is that the divorce rate in the United States hovers around the 50% mark. Except it doesn’t, and never has. The hows and whys of that, however, are a topic of conversation for another time.

In reality, the divorce rate is lower than it’s been in years and has been on a steady if gradual decline. An interesting exercise is to look at divorce by generation and investigate the changing views.

How Has the Divorce Rate Changed With Each Generation?

There are currently six living generations of Americans.

Attitudes towards families and marriage form a definitive piece of each, and examining them provides some insight. There are, of course, exceptions to every rule, and we’ll be looking at these in broad strokes.

Not every member of every generation fits each mold exactly. However, looking at the larger trends of the divorce rate by generation lets us see how prevailing norms evolve over time.

Also widely called the “Greatest Generation,” these are people born from 1901-1926. They experienced two World Wars firsthand, as well as the Great Depression.

One of the defining characteristics of this era is a strong sense of duty, civic responsibility, and right and wrong.

This black-and-white sense of the world extends to how the GI Generation looks at divorce. They take the “‘til death do us part” segment of the wedding vows very seriously. Marriage is a commitment, for life.

Things like divorce or having children out of wedlock are simply not acceptable. Divorce carries a stain and stigma. Because of these dominant cultural and societal attitudes, fewer people from this age group stray from that path.

Related Reading: How Political Differences Can Cause Divorce

Born between the years 1927 and 1945, the generation known as the Mature Silents, or Silent Generation, carry similar touchstones of the previous age group.

Many fought in the Korean and Vietnam Wars, but they also experienced the post-World War II economic boom. Though there were the first rumblings of the Civil Rights movement and feminism, it was generally a time of great conformity.

This conformity also extended to how we look at divorce by generation in this instance. In general, the husband worked, primarily at one job for one employer his entire career, while the wife stayed home with the kids. Marriage is, again, usually for life, and things like divorce and having children outside of marriage are simply not acceptable.

Related Reading: Ways to Save Money During Divorce

Born just after World War II, in the years 1946-1965, the Baby Boomers are the generation that embraced rock and roll, social change, credit cards, and television. With 77 million people, it’s also one of the largest single generations in history.

Widely regarded as self-centered, this age group, also nicknamed the “Me Generation,” pushed against traditional social constructs and boundaries.

Their attitude toward divorce, marriage, and families reflect this changing tide.

When breaking down divorce by generation, this is where the biggest shifts occur. In large part, this is due to the sheer size of this demographic. They carry a lot of weight.

Women of this generation entered the workplace in previously unheard-of numbers. This created more dual-income households. But it’s also the first era where mothers weren’t as pervasive in a child’s life as before.

For the first time, divorce also became more widely accepted. Because of an increased emphasis on individuality, divorce was viewed as an acceptable way to deal with an unhappy marriage.

You were no longer expected to stick it out through irreconcilable differences. This era also began the age of no-fault divorce, where you can end a marriage simply because you want to, without providing cause.

Even as the Baby Boomers continue to age, they divorce more than any other age group. Between 1990 and 2012, the divorce rate for 55 to 64-year-olds more than doubled. For the 65-and-older crowd, that number more than tripled.

Since Baby Boomers had fewer children than their parents, Generation X, those born between 1965 and 1980, is smaller than its predecessor.

More cynical about society and authority, they have an eye on individuality and are likely to change careers multiple times over their lives. They’re also unique in numerous ways when we look at divorce by generation.

As Baby Boomers focused on career advancement, both parents were likely to work. Since divorce became commonplace, Generation X was the first era where having divorced parents was normal. It wasn’t strange or bad; it was just a common fact of life.

For the most part, Generation X responded to this by staying married. More people also put off marrying or decide not to marry at all. But once they say “I do,” GenXers remain married at higher rates than the preceding generation.

Roughly 70% of marriages that took place in the 1990s made it to their 15th anniversary. This is up from 65% for those in the ‘70s and ‘80s. And that number continues to increase. The divorce rate for couples married in the 2000s is even lower.

More than any other previous generation, Millennials, born between 1981-2000, rely heavily on technology. This is the age group that grew up almost entirely with computers in homes and schools.

Generally raised by involved parents, they have a reputation for being overindulged and entitled.

As far as marriage and divorce compared to other generations, Millennials continue some of GenX’s trends. Their marriage rate is the lowest in years at 26%. Compare that to 36% for Generation X, 48% for Baby Boomers, and 65% for the Mature Silents. Millennials put marriage off, or avoid it altogether, at higher rates than ever.

Many attribute this to changing gender roles, increased focus on education, and financial concerns. It’s more common than ever for a couple to live together and even have children and start families without marrying.

Again, this represents a generational evolution in ideas of marriage and family.

There’s one more age group, those born after 2001, known widely as Generation Z. There were a few other nicknames along the way, but this one stuck.

They’ve never known a world without cell phones, laptops, or video games. Within these numbers, there are even wider demographic changes.

2006 saw a record number of births, even more than the start of the Baby Boom. So, Gen Z is a big generation.

While it’s still far too early to look at Gen Z for much concrete information, they promise to be an interesting lens through which to view divorce by generation.

Related Reading: Is the 50% Divorce Rate a Lie?