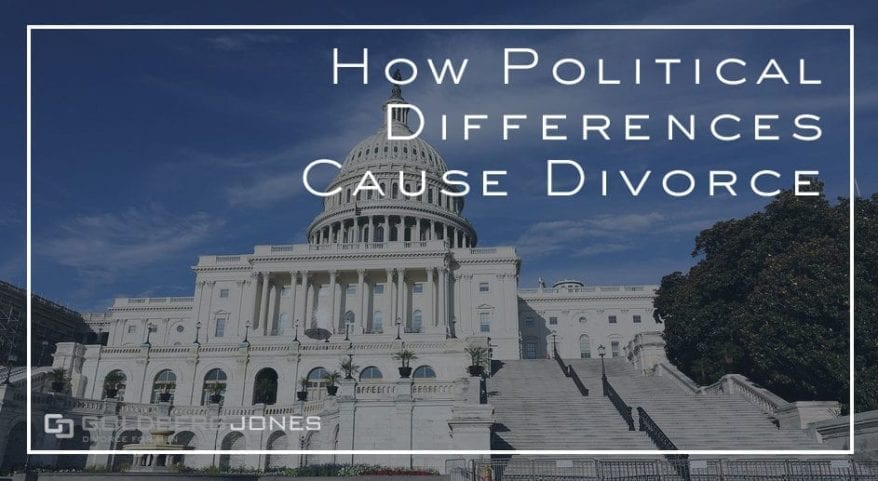 It’s taken numerous forms over the years, but that’s the general gist. And it’s solid advice. People feel passionate about these topics and conversations often become heated. Friendships have ended for less.

It’s one thing if coworkers or even friends have drastically different political beliefs. This often leads to difficult interactions in social situations or at your job. That’s hard enough to handle. But it’s something else when it’s your spouse.

In reality, politics and political leanings often have a huge impact on the stability of relationships and marriages. Ongoing political disagreements often lead to divorce. And it’s only getting worse.

With divisive political figures, most notably Donald Trump, amongst others, and contentious issues cropping up on a regular basis, it’s increasingly common to see cases where politics cause divorce.

Related Reading: Has The Divorce Rate Ever Been 50%? Nope.

Popularized as “The Trump Effect,” the 45th President of the United States had a significant impact on divorce and relationships. He mobilized a wave of supporters, exploited key differences, and created a significant rift in many circumstances.

His presence in the Oval Office also had a substantial impact on personal relationships. Friendships ended, families were at odds, and marriages came to an end, all because of individual feelings toward the former POTUS. A trend that has continued.

One of the most highly publicized examples is the case of Gayle McCormick. The 73-year-old retired California prison guard divorced her husband of 22 years because he voted for Trump. She called it a “deal-breaker” and said she felt “betrayed.”

While McCormick’s case may be the most well-known, she’s nowhere near the only one to react this way. In December 2016, a poll of 6000 people found that 16% of those who responded stopped talking to a friend or family member as a direct result of the election. 17% also said they blocked friends or family on social media for the same reasons.

Their collected data indicates that 11% of Americans, more than one in ten, have ended relationships over political differences.

Politics and divorce often go hand in hand. Such disputes have always been a huge source of shattered marriages. That’s unlikely to change anytime soon. But what can you do if you and your spouse fall on opposite ends of the political spectrum?

Such conflict can kill relationships and lead to divorce. Can is the keyword.

Just because such differences often cause conflict that ends marriages, that doesn’t mean they will. It’s not inevitable.

Every situation involves different people and no two play out exactly the same. If you and your spouse have political disagreements, whether that leads to divorce depends on you.

Some couples are able to work around opposing views. It may take time and effort, or even steps like counseling, but it may be possible. One approach is to focus on the values you share instead of those you don’t.

People from all walks of life, backgrounds, and political parties marry and lead happy lives. It happens all the time. But even if a couple finds a temporary solution, that may not be the best base for a successful marriage.

Ignorance is not Bliss

It may work in the short term, but it can lurk under the surface and cause unseen, unacknowledged tension. In the end, burying it may only lead to a bigger fight down the road.

At some point, if you can’t find a way to comfortably live together, you may need to reexamine your marriage.

Some differences are simply too profound, too fundamental to get past. No matter how much you care about one another, you may need to take a long, hard look at your situation and give it an honest evaluation.

Can you continue to live with and love a person you disagree with on a basic, deep-down level?

Only you can answer that question for yourself, but it’s one you need to figure out eventually. At some point, the detriments start to outweigh the benefits and it’s important to determine what you need and what’s in your best interest.