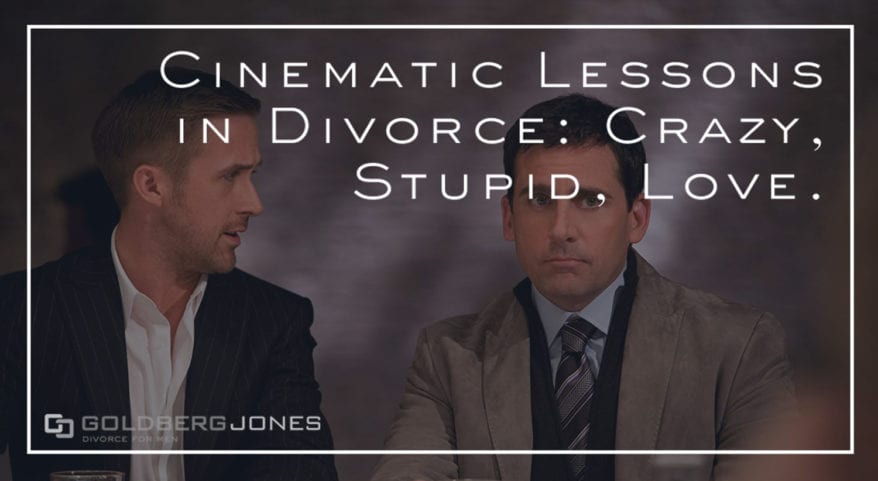 When romantic comedy Crazy, Stupid, Love was released in 2011, the A-list cast alone was enough to get audiences to theaters. Best known for his hilarious role in TV comedy The Office, Steve Carrell plays Cal Weaver, a well-off, middle-aged father of three who married his beautiful high school sweetheart, Emily, played by Julianne Moore.

After Emily makes the startling confession that she not only had an affair but wants a divorce, it forces Cal to rebuild his life. He does so when he meets the handsome ladies man, Jacob Palmer (Ryan Gosling), who takes Cal under his wing.

This blindsided Cal early in the movie and turns his picture-perfect life upside down. Having met and fallen in love at 15, Cal feels lost as he navigates moving forward. In this area, many newly divorced men and women relate to Crazy, Stupid, Love.

He moves out of the family home and into a small apartment. When he informs colleagues and friends of the divorce, like real life, they pick sides. Perhaps the biggest change of all, however, comes with being thrown back into the dating scene. That’s a shock many face after ending a marriage.

Having a rough time adjusting, Cal begins to frequent a local bar. Night after night he spills his guts to anyone close enough to listen. Having heard enough of his pity, Jacob decides to mentor Cal and transform him from a nice-guy family man into the ultimate player.

This includes revamping Cal’s entire wardrobe, making him work out, and teaching him how to pick up women. And it’s a success, though a hollow one.

Though the initial change distracts Cal for a time, he reassesses his new lifestyle and finds it empty. It’s a temporary fix. He can’t ignore the fact that he still loves and misses his wife. When they meet for dinner one night, they have their first real, honest discussion about their marriage in a long time.

The couple experience what a lot of long-term couples go through. Over time, they became complacent in their relationship and stopped trying. Work, the kids, life, and everything else came before each other.

“I got boring, lazy. I’m mad at what you did, but I’m mad at myself too. I should’ve fought for you, you fight for your soulmates.”

Instead of having that conversation and trying to fix what was wrong, Cal and Emily walked away from their marriage. Both recognize this was a mistake and accept their own share of the blame.

After their dinner, things become more positive for the couple.  Reconciliation even seems to be on the horizon. Cal plans an elaborate surprise for his wife in hopes of winning her back. The kids help as well; they desperately want their parents back together. Things go well until secrets emerge and threaten to tear apart their relationship for good.

Cal’s attempt at reconciliation is a disaster. He learns that the womanizing Jacob is dating his daughter and the man Emily has been seeing shows up. It turns out their 17-year-old babysitter, the daughter of a family friend, is in love with Cal, which devastates his son, who’s in love with the babysitter.

It’s a mess. Like so many people in this situation, Cal feels like his life is spinning out of control. Everything he knew is gone, his marriage, his best friend, his relationship with his kids. With everything strained and stretched, a broken Cal pulls away from everyone.

Surprisingly, it’s Jacob who brings him back. He makes Cal see that there are people who need him, especially his kids. Divorce has a trickle-down effect on everyone in your life. Too often, however, we lose that in the pain.

Cal finally realizes that there are people who care about him and that he needs to work on fixing what he can before it’s too late. This includes working on himself, repairing the rift with his children, and even mending fences with Emily.

While everything works out in typical Hollywood, happily-ever-after fashion at the end of Crazy, Stupid, Love, we know that’s not always reality. Still, it illustrates a variety of important things about marriage and divorce. It talks about not getting complacent in your relationship and ignoring signs of trouble, the need to have a support system around you in a tough time, and taking care to maintain your most important relationships.

Crazy, Stupid, Love is a complicated, layered web of connections and emotions. Family is chaotic and messy. So is divorce. Perhaps most importantly, Cal learns to let go of resentment. When he does this, he finally sees things for what they are, recognizes what’s most important, and moves forward. It’s a journey everyone has to take in divorce.