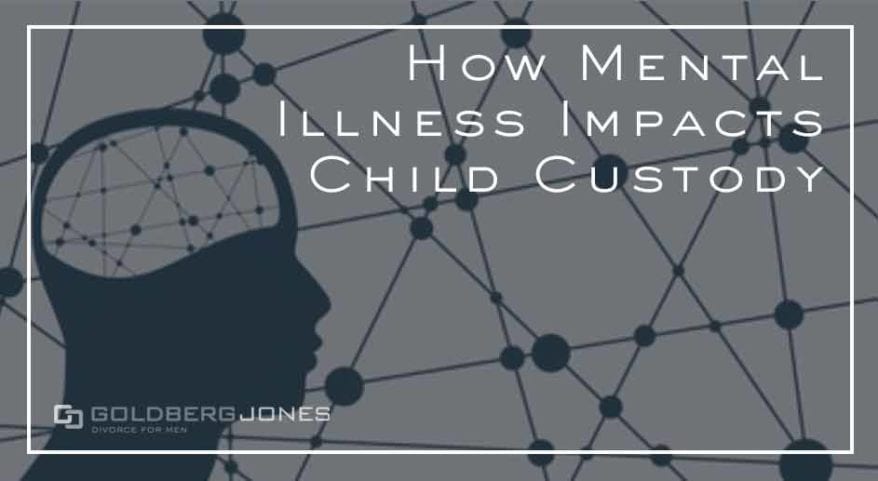 Mental illness affects many people. Still, it’s often a difficult topic for many people to talk about.

Even if kept hidden, mental illness impacts every facet of a person’s life, as well as those around them. It often has a devastating influence on relationships and marriages. Not only does it frequently lead to divorce, but if a parent has mental illness it also impacts child custody cases in significant ways.

The nature of each disorder is vastly different. The same goes for how a particular mental illness impacts a particular child custody case.

Because of the nature of the beast, there’s no one-size-fits-all approach. Every case looks different. It depends on the severity of the affliction, treatment options, the willingness of the parties involved to seek treatment, and many additional factors.

Can You Lose Custody If You Have A Mental Illness?

When determining custody, regardless of the factors involved, including a parent having a mental illnesses, the courts put the best interests of the child ahead of all other concerns. This includes physical and emotional safety.

If it’s unsafe or harmful for a child to be with one parent, that’s the most substantial way mental illness impacts child custody.

It will, however, likely influence the decision. If it negatively impacts parenting ability or the relationship with the child, the court takes that into account when determining parenting time.

A particular disorder may require frequent hospitalization, make a parent prone to violent outbursts, or necessitate in-home care. All of these factors may sway a case in favor of the other parent.

With a manageable condition, the impact is often less severe

If medication, therapy, and other measures adequately keep symptoms in check, a judge is less likely to deny custody. Mild mental illness, like moderate depression or anxiety, may not influence the proceedings at all.

But again, it really boils down to the child’s best interests how much mental illness impacts child custody. Though it may not bar a parent from being awarded custody, it may factor into the type.

Related Reading: Custody: What is the ‘Best Interest of the Child’?

In Oregon, there are two types of child custody: legal and physical.

Within these two types, each may be either sole or joint. Mental illness, the specific condition and seriousness, can influence what a court-ordered parenting plan ultimately looks like.

Legal Custody: Legal custody gives a parent the right to make decisions about a child’s life. This includes education options, health care, where to live, and other major decisions.

Physical Custody: Just as it sounds, physical custody refers to which parent the child lives with.

Those two options sound fairly simple. On the surface they are. As usual with legal matters, especially those involving children, there are shades of gray. Everything isn’t always so straightforward. That’s where sole and joint custody come in to complicate matters.

Sole Custody: Again, the name says it all. Sole custody is when one parent, and that parent alone, has legal and physical custody of a child. In these cases, one parent has the power to make all the decisions regarding that child’s upbringing.

Joint Custody: Joint custody is the most common occurrence custody cases. This is when both parents, though not living together, cooperate to raise their child. Though there’s a primary guardian, this usually involves visitation, and both parents contribute to child-rearing decisions.

Sole and joint custody can refer to either legal or physical custody, and there are a number of variations on the formula.

True sole custody is rare since the courts try to keep both parents in a child’s life. Unless there are extenuating circumstances, some form of joint custody is the most common. A situation of serious mental illness may fall into this category. More on that momentarily.

In general, the court mixes and matches these elements as they best fit a situation.

If you live in the same city, it’s practical to shuttle the kids back and forth, drop them off at school, and all the rest. Kids can rotate easily between houses and spend substantial time with you and your ex.

Once the distance becomes too great, however, it’s more difficult. For instance, if one parent lives in Portland and the other in Salem, a joint physical arrangement is less feasible.

One familiar arrangement is for the child to spend the week at one parent’s house and split weekends and holidays between the two households. But again, there are many different ways for this to shake out.

Okay, now what does all of this have to do with how mental illness impacts child custody? Again, because the child’s best interests remain paramount, it plays into how the court divides up the legal and physical parenting responsibilities.

Legal custody claims may take a hit in this scenario. When one parent has a documented history of mental illness-related violence or other behaviors that may potentially harm a child, courts also weigh those factors.

While mental illness impacts child custody in some cases, it may not dramatically bend a ruling. It all goes back to the severity of an affliction and if the court, usually with the input of mental health professionals, determines it’s safe for the child or not.

Relatively minor cases, or a condition that’s well controlled with medication or therapy, likely won’t tip the scale as much.

Depending on the circumstance, the court may award parenting time to a parent dealing with mental issues. These may be small blocks of visitation that require supervision. However, it truly depends on the specifics of the case. The amount may hinge on that parent adhering to a mental health plan, maintaining a stable home, or other requirements.