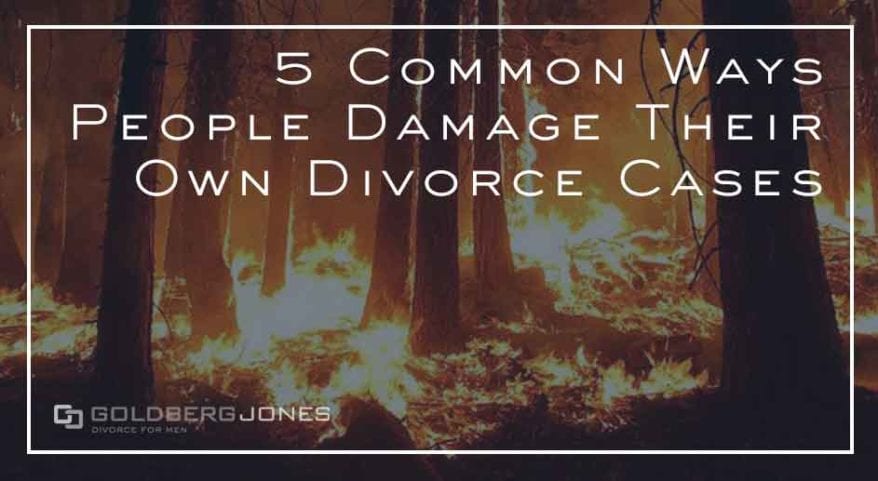 Over the course of the process, divorce tends to get messy and complicated. In straightforward, low-conflict cases, things may progress smoothly. But with forms to fill out, appointments to appear at, and many other moving parts, it doesn’t take much for problems to arise. And that doesn’t even take flaring emotions into account.

Ill-advised choices can harm your cause in a variety of ways. You may miss out on assets in the division of property. Mistakes can impact spousal support awards. Child custody often hinges on the decisions you make. Simple slip-ups may even escalate conflict and tension between spouses.

Many think that being first out of the gates gives you an advantage and rush to file for divorce first. This does prove true in some cases, but not all. Depending on the situation, this strategy can cause people to seriously damage their own divorce cases.

If you’ve prepared ahead of time, have everything in order, and feel ready, by all means, file the paperwork and start the divorce process. But too often, people don’t adequately prepare first.

Organize your documents, set money aside, and have a clear plan of action. Establishing a solid foundation for your case benefits you far more than being the first to file.
Related Reading: Divorce And Filing Forms: What To Know

Even in the best of times, divorce is stressful and emotional. By the time you reach this point, you probably just want it to be over and done with as fast as possible. That’s a natural feeling, but it also leads people to damage their own divorce cases.

Too frequently, people agree to unfavorable terms in a divorce settlement simply to get to the end. Ending a marriage hurts and the process takes a long time, but don’t settle just to speed things up. Take the time to consider what you truly want and go after it.

Finances, child custody, spousal support, and more have huge impacts, and it’s important to get what you need from divorce.

3. Acting Out Of Spite

Letting anger guide decisions rarely turns out to be the best choice. And that’s especially true when it comes to ending a marriage. No one hurts you as deeply as the people you love the most.

Divorce often comes with wounded feelings, anger, and disappointment, which may well be justified. But acting out of spite and using this as a tool to get revenge is one-way people damage their own divorce cases.

More often than not, this just makes the situation messier than it needs to be. It creates hostility, conflict, and additional problems. People often waste time and energy fighting about things that are in reality relatively minor.

When a case involves children, it gets even worse and can harm the kids as well. You may want to express your pain and anger, but this isn’t the proper outlet. In the end, such behavior usually does more harm than good.

When you get to the point of divorce, many couples already live apart. This happens often and sounds like common sense. After all, who wants to live with the person you’re divorcing? However, in many cases, people damage their own divorce cases by leaving the marital home.

Moving out may set a number of precedents that can harm your cause later on. If you have kids, it may negatively reflect on your parenting ability or dedication as a parent. The reality may be the exact opposite, but that’s how it often looks to outsiders.

It may impact child custody, child support, and visitation decisions down the road. Leaving the house in the hands of your soon-to-be ex can hurt your chances of getting it when you divide assets. It also often results in larger spousal support payments. You may even wind up paying the bills when you don’t actually live there.

It’s easier than ever to take a do-it-yourself approach to end your marriage. Online resources offer a step-by-step guide through the process. Just download the forms and with a minimum of fuss, you can file, pay the fees, and be on your way. While it’s ideal for certain situations, this DIY approach often leads people to damage their own divorce cases.

This strategy works best in simple situations. Usually, this means shorter marriages without children and with little or no shared property. DIY often works well in these scenarios.

But the longer a marriage, the more complicated the case, and the more complex the process will become. The potential to make mistakes increases, and it’s possible to do a great deal of harm.

It may be an unwanted expense, but it’s likely in your best interest to consult an experienced divorce attorney, no matter how easy it seems. Even just having a lawyer look over your divorce settlement before you sign it can prevent costly missteps.