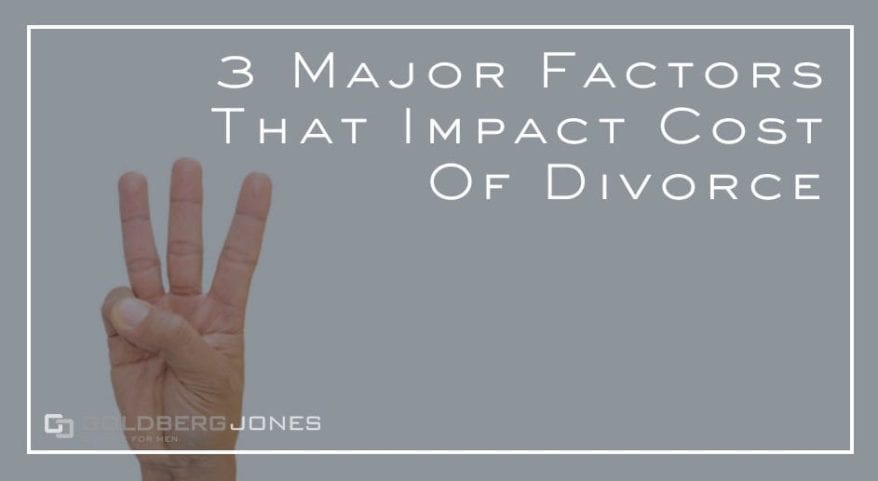 UPDATED: This probably comes as no shock, but divorce is expensive. Why? To paraphrase the old dad-joke, because it’s worth it!

In all seriousness divorce often does cost a great deal of money. Many things impact the ultimate financial cost, and like most things with ending a marriage, it varies from one case to the next. No two marriages are the same. Consequently, neither are any two divorces. Unique elements will always impact some and not others.

Still, there are common factors that often inflate the cost of divorce.

Three majors factors that impact the cost of divorce are conflict, compromise, and counsel.

Let’s break them down:

The first factor that often inflates the cost of divorce is conflict.

The way conflict impacts cost is pretty simple: the more conflict you have, the more expensive your divorce becomes. If you and your soon-to-be-ex fight over every issue, resolution takes time. And that takes money.

High conflict divorces are more complex, and unraveling all of those additional complications takes resources.

Whether you want to hear it or not, divorce takes compromise. Refuse to compromise, and the cost of divorce tends to skyrocket.

The only type of divorce that doesn’t require compromise is a default judgment. That’s when your ex fails to take action and essentially forfeits the case.

It’s key to go into the divorce process with a clear idea of where you’re willing to compromise, and where you aren’t. A clear idea of what is and isn’t open for negotiation helps create a strategy. It’s important to protect what matters most to you, but it’s also vital to know what’s not worth the effort.

Refusal to compromise draws out your case and increases conflict. And remember what was said earlier about conflict increasing divorce cost?

If you can’t compromise on anything, you’re most likely headed to trial. (Though, contrary to popular belief, most divorces don’t go to trial.) Not only is that a costly process, but it also takes the outcome out of your hands and places it at a judge’s discretion.

Divorce doesn’t require you to hire a lawyer. That said, unless it’s a simple, straightforward case with little conflict, it’s usually in your best interest to have representation.

The problem with hiring a divorce attorney is that it costs money.

Divorce lawyers usually charge between $200 and $400 dollars an hour. That figure alone is enough to make a DIY approach tempting. This strategy can, however, wind up costing you even more in the long run.

Many people undertake their own divorce only to end up at a disadvantage. It’s all too common for people to agree to unfavorable terms, a less-than-optimal custody schedule, or leave potential assets on the table.

Yes, hiring an attorney can be expensive. But it can also ensure that support payments are accurately calculated, the division of assets and debts is fair, and you protect what’s most important. The decisions you make in divorce have a huge impact on your financial future.

While the cost may seem like a lot now, you may save thousands of dollars of the course of your life.

It’s probably obvious that these three factors don’t exist in a vacuum. They each interact and play off of one another.

For instance, the less you compromise, the more conflict you experience, the longer the process takes, the more you have to pay your counsel. And so on.

There are ways to cut down the cost of divorce. You can educate yourself on the process, do some of the leg work yourself, and more.

Though there’s the old joke about divorce being so expensive because it’s worth it, it’s definitely worth doing right. What happens here and now echoes for years. It’s important to take steps to ensure you get what you need out of divorce.

Related Reading: 5 Ways to Save Money on Your Divorce