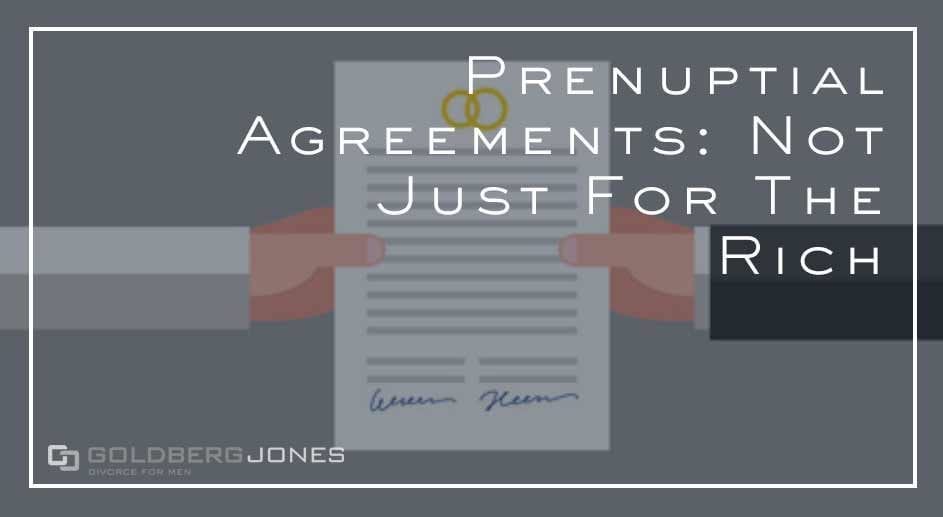 We see it all the time on the news and the covers of the trashy gossip magazines we pretend we don’t read waiting in line at the grocery store. Some celebrity power couple is finally tying the knot! It’s about time. But don’t worry, they’re being smart and have an elaborate prenuptial agreement in place to protect themselves. We were all worried there for a second.

Beyonce and Jay-Z have an agreement that details custody, the division of property, and sets up a trust fund for their kids should they split. Justin Timberlake and Jessica Biel have an infidelity clause in their prenup. If Keith Urban, who has struggled with drugs and alcohol in the past, relapses, Nicole Kidman receives $600,000 for every year they’ve been together.

Many people think of prenuptial agreements as only for the super-rich and wealthy. For people with an excess of cash, houses all over the world, and tons to potentially lose in a messy divorce. And they’re certainly warranted in those situations.

What many people don’t consider, is that prenuptial agreements aren’t only for the rich and famous. They have just as much of a place for the rest of us as well. In fact, a prenuptial agreement may be even more important for people even if it doesn’t look like you have as much to lose. Just because there’s not a ton at stake, doesn’t mean it’s not vital.

On a basic level, a prenuptial agreement is a contract two people enter into before marriage. Ahead of time, they lay out how to divide their assets in the case of divorce, separation, or annulment. Essentially, it’s a way to protect your property, possessions, and resources should things not work out.

Like many legal proceedings, it’s simple on the surface but usually becomes much more complex. Some couples take a “what’s mine stays mine, what’s yours stays yours” approach. But there’s often more involved. What prenuptial agreements cover varies a great deal from one situation to another. You can tailor them to fit your specific circumstances. Just look at the celebrity cases above.

Not everything people try to put into a prenuptial agreement is enforceable, however. Ultimately, it’s up to the court to decide if the contract is valid and stands up. If two spouses enter the arrangement with drastically different levels of power, a judge may throw it out. In these situations, it falls to the spouse looking to apply the terms to prove their case.

Couples often look to head off potential custody fights down the road. But in most situations, premarital contracts stipulating child custody and child support remain unenforceable. Courts place a child’s best interests above other concerns, and that includes parental preference. A judge may go along with the terms of a prenuptial agreement if they’re reasonable, but in the end, it’s up to the court, not the parents.

Spousal support provisions can be enforced, but not always. If they skew sharply one way or another, in an unfair direction, the court may toss them. The same goes if the document isn’t drafted properly. Also, you typically can’t enforce lifestyle provisions, like not gaining weight or maintaining physical appearance. In general, you can’t include any egregious or unconscionable requirements. It can push the envelope, but can’t go too far.

Do Prenuptial Agreements Always Hold Up In Court?

When looking to enforce a prenuptial agreement, the court first examines whether or not it’s substantively fair. They want to make sure it makes reasonable provisions. As long as it doesn’t tip drastically one way or disproportionately benefit the wealthier spouse, it may hold up.

The document must also be reviewed and executed well in advance of the marriage. Courts view dropping a prenuptial agreement at the last minute as coercive. You need time to properly examine the document and have it examined by an attorney. Essentially, the goal is to make sure no one takes advantage of anyone else.

Do I Need a Prenup?

So, do you need a prenuptial agreement? That’s a complicated question without an easy or universal answer.

Some people view them as pessimistic like you’re betting against your marriage. But roughly half of first marriages end in divorce. That number spikes for second and third marriages. Protecting your money and property isn’t the worst idea you’ve ever had.

Even if you worry that a prenuptial agreement may doom your marriage or become a self-fulfilling prophecy, there are a variety of reasons to consider this course of action. They can protect pre-existing assets or guard you against liability for your spouse’s pre-existing debts.

If you have a business that predates the marriage, you can use a prenuptial agreement to ensure it remains yours. Unless you want your ex as an unexpected business partner. Any established business partners will probably appreciate the consideration.

It’s also possible to use prenuptial agreements as preemptive measures. If you anticipate receiving an inheritance or have a family estate, they can protect that. If one spouse quits a job in order to care for your children, such a contract may guarantee that the financial responsibility doesn’t entirely fall on the non-working spouse in the wake of divorce.

Whether or not you need a prenuptial agreement is, in the end, a personal choice. They can protect you, your family, your assets, and your business, among other things. But it’s up to you to make the call.