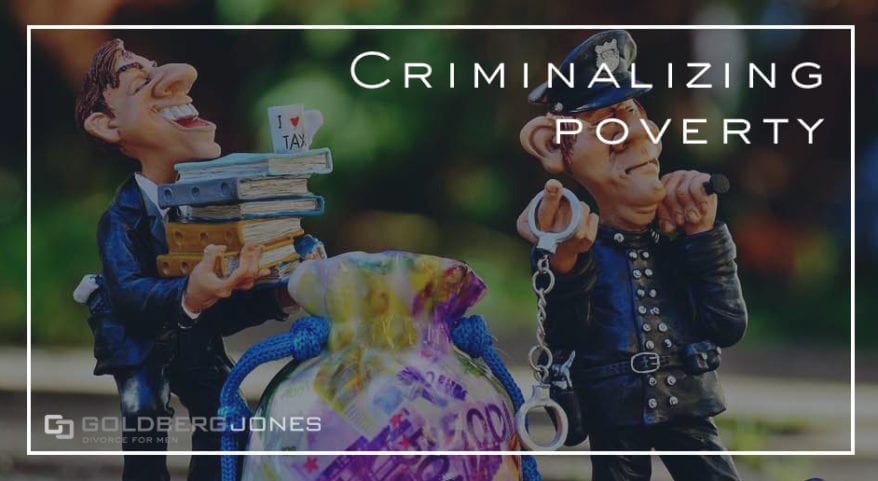 In the media, we hear a great deal about the problems dads who lose their jobs face. Many become stuck in situations where they can no longer afford to make child support payments. They’re often labeled “deadbeat dads.” After months of failing to pay, the courts may find these fathers “in willful contempt” and sentence them to fines and jail time.

We also see stories about parents with money and means who simply don’t pay child support because they don’t want to. That’s not the case here. These are fathers who want to pay, and do while they’re able to, but simply can’t due to circumstances beyond their control. It is in effect a way of criminalizing poverty.

Related Reading: My Ex Refuses to Pay Her Share of Child Support

What Happens If You Can’t Make Your Payments?

A few years ago, we came across the story of Randy Miller. His saga exemplifies the hurdles divorced dads face when they lose their jobs and can no longer pay child support. Though he consistently paid for years, he found himself unemployed and unable to cover his child support.

A Georgia judge sentenced the then-39-year-old Iraq War veteran to jail for violating the court order.

He said he was stunned when the judge rebuffed his argument that he had made regular payments for more than a decade before losing his job in July 2009 and had recently resumed working.

After spending three months in jail, Miller was finally released. Subsequently, he, along with six others in similar situations, filed a class action lawsuit against Georgia.

They claimed the state violated their sixth and fourteenth amendment rights. The case sought to require the state to provide lawyers for poor, non-custodial parents who faced possible incarceration for child support debt when the state was a party to the complaint and had representation.

According to the lawsuit filed by the nonprofit Southern Center of Human Rights in Atlanta:

“Languishing in jail for weeks, months, and sometimes over a year, these parents share one trait … besides their poverty: They went to jail without ever talking to an attorney.”

They argued that throwing parents in jail for back child support hurt children. While in jail, that parent can’t work and often loses their job. Further, they claimed that the bulk of the efforts to collect back child support unfairly focused on poor communities.

The case went through multiple rulings and appeals. Ultimately, it reached the Supreme Court of Georgia three years later. They found:

“[N]o absolute, inflexible, and categorical right to appointed counsel in child support proceedings as a matter of due process, even when the Department, represented by its own lawyers, pursues the incarceration of an indigent parent.”

The case was subsequently dismissed.

How This Impacts You

While this case is specific to Georgia and the laws of that state, these situations are not isolated. Fathers face similar hardships and uphill battles across the country.

While jailing non-paying parents — the vast majority of them men — does lead to payment in many cases, critics say that it unfairly penalizes poor and unemployed parents who have no ability to pay.

Federal law stipulates that they must have “willfully” violated a court order before being incarcerated. In these situations, it’s not intentional, they simply lack the resources.

While there are some people out there who neglect their responsibilities, most of the time so-called “deadbeat” fathers are victims of circumstance. People lose jobs, face injuries that leave them unable to work, and deal with other tragedies.

If you lose a job, even for a short time, it’s all too easy to fall behind. Before long, that maintenance obligation swells and becomes practically insurmountable. It often takes years to dig out of these holes.

Related Reading: How Does A Support Modification Work?

Unfortunately, we don’t usually see people until it’s too late. By the time they walk into our office, they’ve been out of work for a while and are significantly underwater on child support.

What many parents don’t know is that they can petition the court to modify their child support obligation when their financial situation initially changes.

The law provides four situations that allow you to modify child support obligations:

However, the longer you wait, the greater your burden becomes. It’s unlikely that the court will retroactively modify your obligations. So whatever debt already piled up remains. That’s why, as soon as you know you need to alter your obligation, contact a lawyer.

That said, it’s still difficult to modify child support, even if you do demonstrate a significant change in income. Sometimes, even then, the court leaves the orders in place. It’s an especially tough rough if you represent yourself. An experienced attorney can help you through the process and hopefully obtain an optimal result for you and your family.

Cinematic Lessons in Fatherhood: The Pursuit of Happyness