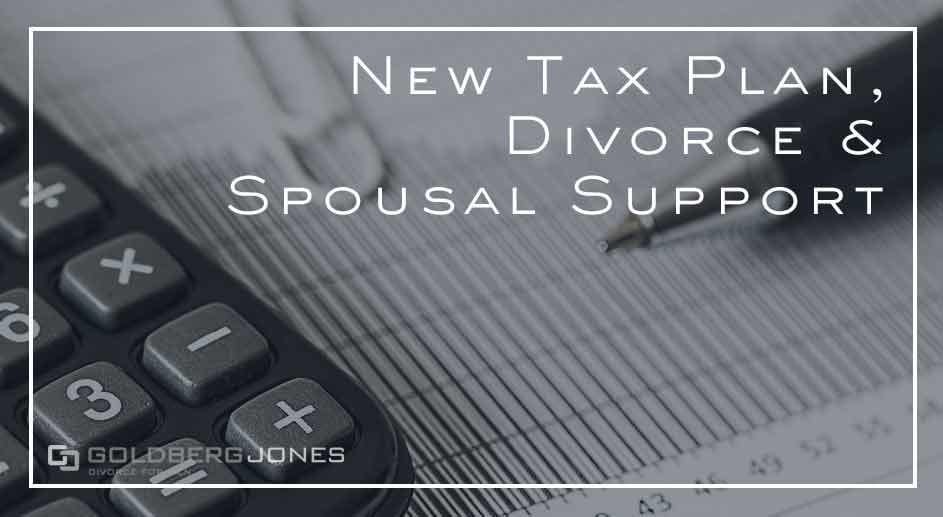 “In this world nothing is certain, except death and taxes.” So goes the familiar saying often attributed to Benjamin Franklin.

With that in mind, we want to remind you of the tax changes and their potential to impact divorce, specifically spousal support.

While we knew it was coming, it didn’t take effect until 2019. These changes affect many areas and most people will feel them in one way or another come tax time. Most important to family law, however, they alter how the government taxes spousal support payments.

It’s key to note that if you had a divorce settlement in place in place prior to January 1, 2019, and that decree includes spousal support, everything should remain the same.

Only new settlements are affected moving forward. That said, should you, in the future, modify your spousal support arrangement, any subsequent settlement will be subject to the new laws.

Original Post:
At the tail end of 2017, Congress passed a massive new tax plan. Much has been said about the contents, and experts in the field have analyzed every last word. Deductions, retirement, and even private jet ownership will feel these changes when they take effect. It reaches into most aspects of American life, which includes divorce.

New regulations remove a stipulation that’s been on the books for more than 70 years. This eradicates the tax deduction for spousal support payments.

This doesn’t alter deals that are currently in place. Nor will it sway divorce settlements on the books before then.

It will, however, influence all settlements after January 1st, 2019. And it holds the potential to cause drastic changes to the entire divorce process.

Many expect it to alter the way attorneys and courts approach negotiations.

What Is Spousal Support?

The basic definition of spousal support is payments one spouse makes to the other to lessen financial hardship after divorce. As usual in these matters, it’s much more complicated than that, but that’s the baseline.

Depending on the situation, it can last for a short time.

All of this leads to an amount and duration.

What The New Tax Plan Changes

As stated earlier, the new tax plan abolishes the tax break for the paying spouse. After December 31, 2018, you will no longer be able to deduct spousal support payments. At the same time, the recipient won’t be obliged to pay taxes on this amount. Currently, the opposite is true.

This represents a huge “above the line” deduction instead of an itemized one. This deduction saves the payer a lot of money. This often leaves more money to divide between exes, which leads to larger payments.

But the tax plan will reduce the gross amount of the payments and wash away the benefits of the deduction. Many predict this new situation will alter the way people bargain in divorce.

Existing deals will be grandfathered in under the new tax plan. It only impacts obligations established after December 31, 2018. So if you have a deal in place, it won’t affect you. Unless you modify your spousal support payments after this date.

Before you can modify spousal support, you must prove a substantial change in financial situation. This can be your circumstances or your exes, and it can also mean an increase or decrease.

Whatever the situation, any modifications that come after the new laws begin, fall under the new regulations. This may create a chilling effect, even if you have a legitimate claim for reduction. As we approach 2019, if you’ve considered trying this, it’s important to think of the timing.

Arguments For The New Tax Plan

Opinions are split and vary drastically when it comes to the new tax plan. The House Ways and Means Committee looks at it like a “divorce subsidy.” According to them, “A divorced couple can often achieve a better tax result for payments between them than a married couple can.”

They’re not the only ones who see potential benefits. The Joint Committee on Taxation, a congressional committee dedicated to investigating tax matters, expects certain windfalls.

They estimate a $6.9 billion increase in tax revenue over the first ten years. Admittedly, while this is encouraging in one regard, it doesn’t necessarily help out individuals, especially those paying or receiving spousal support.

While some point out potential upsides, others have been more critical of the new tax plan. The biggest criticism is that opponents claim the higher-earning spouse will wind up paying less and the recipient will receive less. Opponents fear this means the person who needs it most will wind up not getting the appropriate amount of support.

The current setup allows for larger payments with a lower after-taxes obligation. This allows one side to pay more but receive a nice tax break that evens things out a bit. At the same time, the recipient also collects more than they might otherwise.

This may make it more difficult to make ends meet. Many see this as defeating the entire purpose of spousal support in the first place.

Though people argue about the true effect of the new tax plan, one thing is clear: it will have an impact. The full extent remains to be seen. But it has the potential to alter the landscape of divorce, divorce settlements, and even the way people negotiate when ending a marriage.

Though frequently a vital piece, spousal support is in reality just one element of divorce. How it plays out depends on the unique finances of each couple—no two cases are ever identical. However, most divorces that include spousal support obligations will experience the impact of the new tax plan.