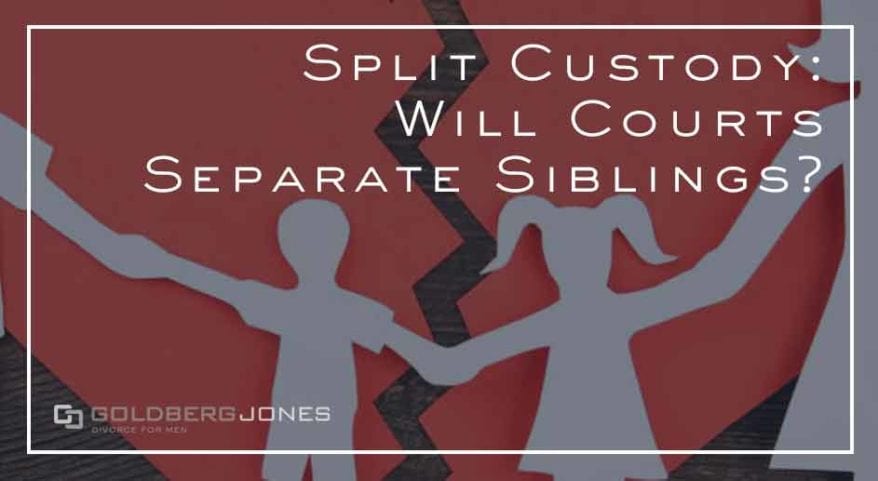 Divorce arrives with changing living situations, new schools, and uncertainty. Siblings often lean on each other to make it through these tough times. But during the process, the question comes up: under what circumstances would the judge order to separate siblings in divorce?

What Is Split Custody?

Split custody is essentially an agreement that orders the children in a family to be split up, with one or more children living with each parent. The good news is that, unless there are extenuating circumstances, the court rarely separates siblings in divorce.

The Best Interests of the Child

When it comes to child custody in Oregon, the primary concern is the best interests of the children. In most cases, the authorities view keeping brothers and sisters together as the ideal choice.

Children go through so much during the process that judges hesitate to add to that. This includes separating siblings after the divorce.

A number of studies show the benefits of siblings staying together in the wake of divorce. These often-cited positives include:

Stability: In times of great change and upheaval, children tend to cling to any sense of stability. With new living situations, stepfamilies, shuttling back and forth between households, and more, this is frequently a sibling.

Comfort: It’s reassuring for a child to know they don’t have to go through this alone. Having a sibling nearby during tough times provides comfort and eases stress. It’s common to hear siblings talk about the relief of having a brother or sister around during divorce.

Support: Support has many meanings. It can be in the practical sense of the word, like having someone to help with homework. But it also often means something along the lines of moral support. Again, sometimes simply having a consistent presence around helps a great deal.

Caretaking: Siblings who have gone through a divorce often mention another sibling serving as a caretaker or protector as a benefit of not having split custody. Older siblings frequently help younger ones understand what’s going on or even shield them from less-than-pleasant realities.

For these reasons, as well as others, the court is generally reluctant to separate siblings in divorce. That doesn’t mean, however, that split custody doesn’t happen sometimes.

When Will a Judge Split Up Siblings?

Because the courts usually view keeping siblings together after divorce as in the children’s best interest, it rarely orders split custody. A judge typically won’t separate siblings simply because it suits one parent or the other.

However, if breaking up the band truly does serve the children’s best interests, it can happen.

Safety is one example of when the court may order split custody. For instance, if a brother and sister are unable to safely live in the same place, a judge may separate siblings.

This type of situation goes beyond a normal antagonistic relationship between siblings. Conflict happens to just about everyone with brothers or sisters. We’re talking about a scenario where one child legitimately poses a threat to the other.

If there’s a potential danger, and if one parent is better suited to deal with the situation, a judge may separate siblings. If things are this bad, however, it’s probably best to consult a mental health professional if you haven’t already.

Related Reading: Custody: Best Interests of the Children and What that Means

What If Children Request Split Custody?

The court won’t necessarily separate siblings to accommodate parents. But what if the children themselves request split custody?

Again, in these situations, the children’s best interest remains the chief concern, regardless of preference.

The court is under no obligation to consider such a request. That said, if a child is old enough and has a legitimate reason to want to live with one parent over the other, the court may—emphasis on may—take this into account.

Many reasons exist why a child might prefer split custody. In most cases, it has a great deal to do with the parent/child relationship. If a son is close to his father but has a strained relationship with his mother, it makes sense he would want to live there.

Additionally, an older sibling may also want to live apart from a younger brother or sister. This may provide a sense of independence or freedom they crave at that age.

There are as many reasons for a child to request split custody as there are children. But if it isn’t in their best interest, the court won’t likely honor such a request.

Whatever the living situation, it must truly be in their best interest. It can’t just be, “Mom lets me stay out as long as I want,” or “Dad doesn’t care if I do my homework.” There needs to be actual substance to the claims or they won’t fly.

In child custody cases, parenting plans lay out all of the aspects of the living situation. This includes primary custody, visitation schedule, child support, and more.

Custody plans become tangled in the best circumstances. If the court separates siblings, it often creates a logistical nightmare.

In most cases, parenting plans specify the time parents spend with their children. When it comes to split custody, visitation must also account for siblings spending time with each other. This further complicates what is already a complex situation. Yet another reason why the courts prefer not to separate siblings in divorce.

As so frequently happens in divorce, split custody often comes down to money.

If a parent feels like supporting multiple children presents too much of a financial burden, they may ask the court to separate siblings.

When it comes down to it, in most cases this is unfounded. When the court awards custody, the custodial parent is ideally entitled to an adequate level of child support.

This amount changes depending on the number of children. The court considers numerous factors when calculating child support, but there is a formula.

The court wants to ensure a child’s economic needs are met. They account for:

While certain circumstances exist where parents or children may request the court separate siblings in divorce, in most cases it’s not even an option. Divorce and custody battles are tough on everyone, especially kids. Courts are reluctant to do anything that adds to this burden, including awarding split custody.