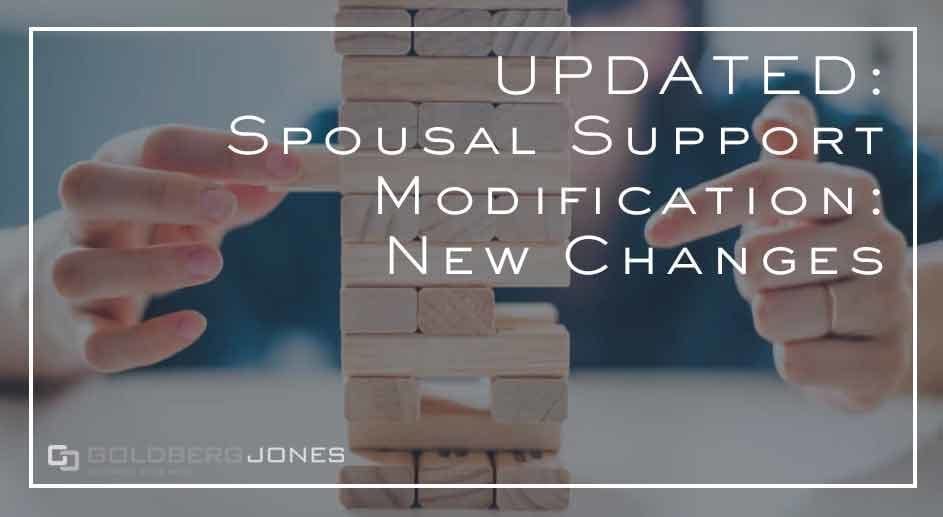 In the wake of divorce, you face many expenses. Ending your marriage may be the absolute right choice, but it rarely comes easy or cheap. One of the biggest continuing costs many men encounter is spousal support.

Like many court orders, once in place, these payments become difficult to alter. But a new law just took effect in Oregon that may have a huge impact on spousal support modifications.

It’s traditionally been no easy task to modify spousal support. Up to now, it usually involved a lengthy proceeding where one party showed that the other’s financial status significantly changed. This was a detailed process that often required meetings, hearings, and a whole mess of time and money.

On January 1, 2018, however, Senate Bill 492 took effect in Oregon. Prior to this law coming into play, if you wanted to show that your ex’s financial state significantly improved, you had to actually file for modification in order to request financial discovery.

You had to do this just to determine if spousal support modification was even an option. That’s already an in-depth, expensive, time-consuming endeavor. And that alone turned many people off, even when they had a legitimate case. This new law theoretically changes that.

Under the new legislation, you can request your ex’s significant financial information without going through such a lengthy process. You can only do this once every two years, though you’re also required to submit your own financial documents.

Still, this substantially redefines the method for attempting spousal support modification. It may prove faster, more efficient, and more cost-effective. You no longer have to file a court case before you know if you even have a chance.

Like most new laws, the concrete effect of SB 492 remains a bit up in the air. We’ll have to wait and see how the courts interpret it and how it plays out in the real world. And like most new regulations, there are potential perks and pitfalls.

This is just a quick take on how SB 492 may very well have an impact on how spousal support modification in Oregon works moving forward. Right now, there are many hypotheticals.

How exactly it takes shape, how courts interpret the regulation, and how it’s employed will become clear over time. And as with most new regulations, it has potential benefits as well as potential drawbacks.

Still, this is something to keep in mind moving forward. It presents a number of intriguing possibilities and ideally reduces some of the headaches and exertion associated with spousal support modification in Oregon.

At the same time, the recipient will no longer have to pay taxes on this amount. As it currently stands, the opposite is true. This may impact the way people negotiate divorce settlements.

This change will also effect any modification to a pre-existing court order.

Since spousal support is no longer an ‘above the line’ deduction, it’s estimated payments can drop as much as 10% to 15%.

However, this large change in spousal support taxation policy will not apply to existing divorce orders (those entered prior to January 1, 2019). These orders, so long as not later modified, will be grandfathered in at the prior tax policy.