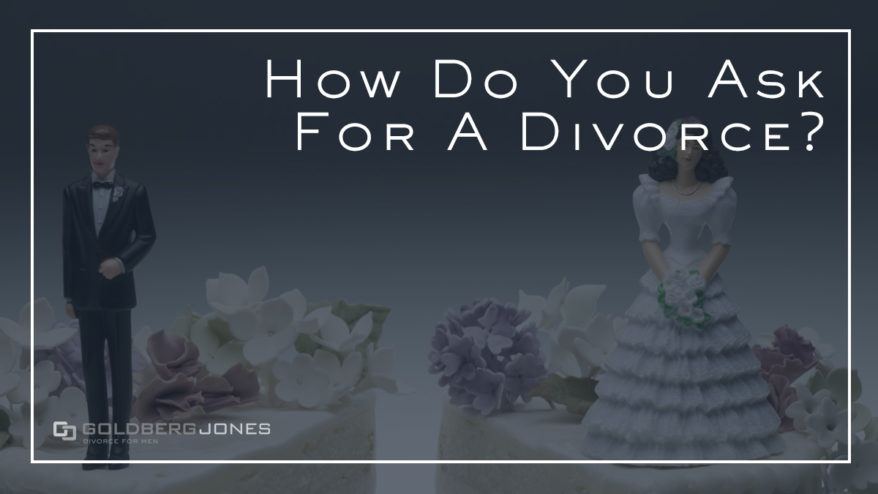 Marriage isn’t always sunshine and puppy dogs. It takes a lot of work, time, effort, and often struggle. And still, it doesn’t always work out. Try with all your might, sometimes you just can’t make a marriage work. But when it’s time to pull the plug, you face one massive obstacle: how do you ask for a divorce?

This is an uncomfortable conversation, but an important first step. In reality, asking for divorce represents a talk you simultaneously do and don’t want to have.

You’re after the end result, which will, ideally, leave you in a better situation. But it’s still not a discussion most people look forward to.

By the time you reach the point where you’re ready to ask for a divorce, it’s safe to say your marriage has serious problems. In many cases, your spouse likely noticed these as well. But that doesn’t mean this is an easy exchange.

The Do’s And Don’ts of Asking For A Divorce

This is a sensitive, emotional topic, and not one to take lightly. Divorce permanently changes almost every aspect of your life in one dramatic shift. Your current and future financial picture, living situation, and how much time you spend with your kids. All of those and more take a hit.

A single conversation often sets the tone for the process that follows. It’s vital to handle things the right way to ensure you emerge on sound footing.

Your spouse may be on the same page. Then again, news that you want a divorce may come as a complete and utter shock. Whether things proceed in an amicable fashion or become contentious and angry, often starts here. With that in mind, here are a list of things to consider when you ask for a divorce.

Pick The Right Time and Place

There may not be a “right” time to ask for a divorce. It’s never going to be easy or clean or fun. Still, it’s important to account for a number of things when deciding when and where to bring up the topic.

Don’t Tell The World About Your Divorce First

By the time you’re ready to ask for a divorce, you’ve probably bounced the idea off of close friends and family. That’s understandable. It’s important to talk through major decisions like this. But there’s a line.

You can let everyone know about it later, but it’s important to talk with your spouse first. Otherwise, it can lead to hurt feelings and bitterness that often manifest later in the process. It can also come back to damage your case in court.

Be Calm But Direct With Your Spouse

This represents an emotional moment for everyone involved. Few things rile people up like divorce. Your spouse may get angry or defensive. But it’s important to keep an even keel and behave in a rational manner.

Some experts suggest avoiding “I” statements, so it doesn’t feel like a personal attack or accusation. Instead, they recommend using “we” statements, like “we don’t communicate anymore” or “we don’t get along with each other.”

While it’s vital to remain calm, it’s also key to be firm and strong. In reality, you don’t actually ask for a divorce. What you’re doing is saying “I want a divorce.” Oregon practices no-fault divorce, so neither party can prevent the other from ending a marriage. The courts will grant you your divorce regardless of whether your spouse agrees or not.

Still, the process requires some degree of cooperation, or at least the ability to work together. Especially when you have kids or complicated estates to divide.

You know your spouse, likely better than you know anyone else in the world. At this stage, you can probably anticipate the coming reaction. Will it be a shock or a shrug? Are you in for a screaming match or a calm, detailed conversation?

Whatever you anticipate, prepare for that. If all you do is fight lately, you may be in for a doozy. Then again, maybe you expect them to be on the same page.

But even if you think you know what’s coming, prepare for other potential outcomes. Though it may not come as a shock, just hearing the words often stirs up all kinds of emotions. People don’t always behave as expected, so also get ready for surprises. Once you’re ready for any reaction by your spouse, good or bad, then have the conversation.

Plan for the Future

In most cases, you don’t want to ask for a divorce and immediately start talking details. There are sure to be some situations like that, but for the most part, everyone probably needs time to decompress and cope. That said, you should at least give some thought to what comes next.

You don’t necessarily have to have a set-in-stone plan, but it’s good to at least give it some thought. This is also a perfect time to consider whether or not you need to hire a divorce lawyer. It’s also a great idea to get your finances in order.

If you’ve made up your mind, if you’re 100% certain that divorce is the right choice, shut the door. It’s one thing to bring up the topic of divorce, to put it out there as an option.

But if you know beyond a shadow of a doubt that your marriage is over, be decisive. Be clear, be concise, and don’t leave lingering possibilities. If there’s no chance, make that clear.

It’s not easy to ask for a divorce. Even though you believe it’s necessary, neither party will come out of this conversation feeling wonderful. You may feel relief, but you probably won’t want to celebrate.

It’s important to prepare for all eventualities. Even if the writing’s on the wall, this move may come as a shock. Carefully consider what you say, when you say it, and how. This isn’t an easy decision, but if your marriage is truly beyond saving, it’s likely for the best for both of you. There’s much more to consider along the way, but this gives you a starting point.